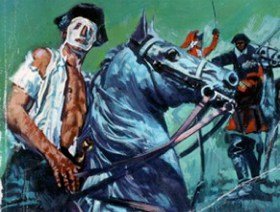 It’s a bold move to adapt a book for the stage, and even more so to choose one from the middle of a series – a bit like leaping straight in with The Prisoner of Azkaban, and ignoring The Philosopher’s Stone. So I was a bit concerned that while watching The Shadow of Doctor Syn, based on the novel by Russell Thorndike, I would be lost as a result of not knowing the back story.

It turns out I needn’t have worried. This is an action-packed tale of smugglers, highwaymen and doomed love, directed by lifelong Doctor Syn fan, Genni Trickett, and performed by the Q2 Players – and there’s more than enough to keep the audience entertained. While it’s clear that there is more to the story, it’s not necessary to know it for the purposes of this play, which is quite capable of standing alone.

Dr Christopher Syn, the respectable vicar of Dymchurch, leads a double life as the Scarecrow, an infamous smuggler wanted for all manner of crimes. But life’s about to get complicated; not only is the French Revolution going on just across the water, but there’s a bounty on his head, and then he falls in love with the local squire’s daughter Cicely, leading him to consider giving up his life of crime and settling down with her.

Tim Goldman leads the cast, effectively playing two roles as he slips effortlessly between the mild-mannered Dr Syn and the sinister Scarecrow. (And in his scarecrow mask, he really is quite sinister – I fear I may have nightmares.) Tim Williams is hilarious as the drunken squire, while Cat Lamin gives a spirited performance as the impetuous Cicely. In fact, the whole cast seem to be having a great time, and I particularly enjoyed the portrayal of Dymchurch residents as country bumpkins, living in the back of beyond and so easily outwitted by the cunning Dr Syn.

Although working with a fairly basic set, the production makes creative use of the space available, with actors entering and exiting through three different doors, and some of the more complex action taking place off-stage. Sound effects help to set the scene, whether it’s a hooting owl or the sound of the crashing waves, and fill in the gaps when we can’t see what’s going on.

The Shadow of Doctor Syn has it all: laughs, romance, sword fighting and even a tragic conclusion. Cicely’s death, protecting the man she loves, is genuinely moving and a powerful scene on which to end the play, even if it does mean a few things get left up in the air – not least, who knows about Dr Syn’s other identity and who doesn’t. The play is clearly a labour of love for its director, who’s managed to successfully distill a fairly complex story into an enjoyable two hours of theatre. And perhaps most importantly, it’s made me want to go and read the series of books from the beginning, to fill in that missing backstory.

Legendary smuggler The Scarecrow faces his toughest challenge yet trying to clear his name, find true love and prevent history repeating itself.

Reverend Christopher Syn a former pirate, turned smuggler appears to be the respectable vicar of Dymchurch to all but his closest friends. The Shadow of Doctor Syn is set during the time of the French revolution and Syn must rescue people from the Reign of Terror, thwart notorious French politician Robespierre and try to maintain his disguise in front of everyone around him, including the squire’s inquisitive daughter, Cicely.

It’s a production of Hamlet that starts at 7:30pm and manages to come down on the ‘right’ side of 10:30pm - the hardcore fans and followers of … END_OF_DOCUMENT_TOKEN_TO_BE_REPLACED

For seasoned theatregoers, this version of The Three Musketeers comes across as one of those shows that takes a similar format to something one has … END_OF_DOCUMENT_TOKEN_TO_BE_REPLACED

Already in a good mood because there is abundant free parking after 1.30pm on a Saturday (and all-day Sundays) near the venue, Little Angel Theatre’s … END_OF_DOCUMENT_TOKEN_TO_BE_REPLACED

There’s an air of familiarity for people who have been in the entertainment industry in this narrative. Global pandemic or not, supply always exceeds … END_OF_DOCUMENT_TOKEN_TO_BE_REPLACED

This was originally meant to be called West End Musical Christmas, and got postponed as the Government had no choice but to impose another lockdown - … END_OF_DOCUMENT_TOKEN_TO_BE_REPLACED