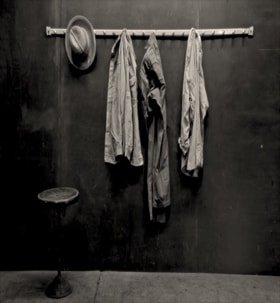 Theatre practitioners (by which I mean people with a direct involvement in the industry) will have much to take away from The Twentieth Century Way, which came across to me as a drama about drama more than anything else, despite a gritty storyline about actors who are deployed by the Los Angeles Police Department (LAPD) just as the First World War was breaking out, to assist them in an aspect of law enforcement. Decoys is the effective word, though not used in this play. The details are, ahem, fleshed out (not for nothing is this production deemed ‘not suitable for children under 14 years’), in an intriguing but unnecessarily complicated manner.

Brown (Fraser Wall) and Warren (James Sindall) play so many parts between them in this fast-paced play that it is, frankly, difficult to keep up. This is, mind you, one of those shows that should ideally be seen more than once to fully appreciate all the various nuances and points of view that the audience is asked to consider.

The backdrop used to tell the story of undercover LAPD activity is, at surface level, quite simple. Both Brown and Warren are in a movie studio waiting to be called to audition for – well, whatever character it is they are going for. There is a delay, for reasons not explored by the play, mostly because they aren’t really that important, but it will nonetheless irritate those who like these sorts of details filled in for the sake of completeness. It is suggested by Warren that the pair start improvising to act out the ‘purity campaign’ of 1914. Whether it is indeed improvised, at least to a certain extent, I couldn’t possibly say. But there is a strong impression that both halves of this duo are consciously trying to keep the other on his toes.

The sheer fluidity between scenes means the 80-minute running time flies by. It is, however, somewhat unfocused, and the whole LAPD story, the wider and relatively long-lasting implications of which could have been explored more deeply, ends up playing second fiddle to discourses about Shakespeare, acting methodology (Stanislavski seemed popular with Warren) and whether everyone is an ‘actor’ in the performance of life – and if so, who the audience might be.

These are the sorts of questions that could be explored on their own in a different play, perhaps several. The whistle-stop tour approach taken here makes the play look like the kitchen sink and then some has been thrown at it. Flitting between 1914 and what is presumably the present day, back and forth, means that just as the audience is very much getting into an aspect of (either) story, the play changes tack again. The overall end result is that, as a production, it’s just a tad too disjointed for my liking.

That said, both actors portray at least a dozen characters between them, quite possibly more, highly convincingly. And in exposing, as it were, a part of Californian history that, especially through contemporary eyes, was dark and shocking, the play does at least, to quote Hamilton The Musical, help audiences appreciate “how lucky we are to be alive right now”. A sincere and somewhat compelling production.

Los Angeles 1914 – a place where modern world reality meets 19th Century bigotry. A time when law enforcement agencies are on a collision course with the clandestine and illicit gay community. In this environment, the police department of Long Beach, California hire two actors as “vice specialists” – their role “to entrap social vagrants” in a sexual act by posing as homosexual men. Lurking in public restrooms and bathhouses, they entice likely suspects into exposing their genitals, then arrest them and in so doing earn $15 a shot. Thirty-one men are arrested. At least one commits suicide.

The American Way tells the true story of a dark chapter in the history of gay rights. Two actors take on a dizzying array of characters from cops to vagrants, lawyers to hacks, bait to quarry in a work that tackles the thorny themes of persecution, secret love, sex, deception and the relationship between dissemblance and performance.

Harold Shipman, known to his many patients, family and friends as ‘Fred’, was Britain’s worst serial killer. The official inquiry into his crimes … END_OF_DOCUMENT_TOKEN_TO_BE_REPLACED

Being one of Arthur Miller’s best-made and most challenging plays, The Crucible is also one of his most frequently performed. I was going to say … END_OF_DOCUMENT_TOKEN_TO_BE_REPLACED

To be fair, Linda Lavin called her concert Love Notes, there’s an album of the same name, and that’s more or less what it was about - variations on … END_OF_DOCUMENT_TOKEN_TO_BE_REPLACED

Noughts & Crosses is a euphemism for blacks and whites. The Noughts are the whites and the Crosses are the blacks. In the world of the play, the … END_OF_DOCUMENT_TOKEN_TO_BE_REPLACED

This ‘juke box’ musical offers highly polished, undemanding, feel-good entertainment, showcasing, as it does, 30 songs dating from the 1960s to the … END_OF_DOCUMENT_TOKEN_TO_BE_REPLACED