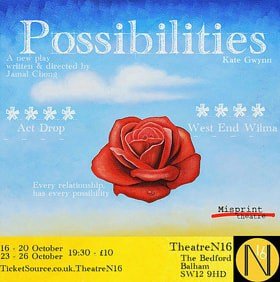 Life is a series of moments. Some good, some bad. Some tragically hilarious. In Possibilities, a new play written by Jamal Chong, you get to experience a wide selection of moments between a man and a woman, from meeting after years apart, zig-zagging across their past together until we, at last, see their first meeting.

A man and a woman are indeed what we encounter when we enter the theatre, although they have their back to us, moving slowly to the back curtain where they start turning on little lights in white and blue, as we settle into our seats. The couple turn to face each other, and the first scene begins, which is basically a screaming match in which they nearly hurt each other. A quick audio cue, the same two characters are coming across each other in a grocery store, roughly a decade later, in one of those awkward ‘meeting your ex moments’ we’ve all experienced.

For the duration of the play, we traverse through the couple’s past, from their very early friendship in their teenage years, to falling in love, to it falling apart, and everything between. We see happy moments, uncomfortable moments, sad moments, and the previously mentioned tragically funny one for the audience as the woman comes home in tears after having hit a fox with her car, where the man doesn’t quite manage to comfort her. There does appear to be more instances of the woman looking bad and we have a few cliches like the woman nagging the man about reservation and arguments about driving, but while the man may come across better, the woman is a more well-rounded character, especially at the points where she talks too much and you cringe, wanting her to shut up for her own sake.

The sweetest scene in the play is when the two characters are writing a song together. In the moment of collaboration, they seem truly connected and appreciative of each other. Although the woman rushes off quickly after, leaving the man by himself, it’s a lovely moment of friendship that lingers in your thoughts after you leave. And it’s the friendship of the characters that shines the strongest in the play. In fact, the moments of friendship are all stronger and feel more real than a lot of the relationship scenes. So while there was a possibility for love there, maybe remaining friends would have been better for these two? It’s up to the audience to speculate.

The play is well-paced and wonderfully performed by Jamal Chong and Kate Gwynn, I was especially impressed with Gwynn’s ability to go from very extreme ends of the emotional spectrum from scene to scene, and was also moved by her character’s tears as she missed her recently passed away father. Chong is also very good but I do wonder if the piece could do with an outside director, as being the writer, the lead, and the director all at once, I have a feeling he’s got more to show us as an actor.

It’s a gem of a play that is perfectly contained and very sweet, with lovely sound design and two strong performances. At just under an hour, it’s a short one, but this sort of storytelling could drag if it was longer. As it is, it’s a nice snapshot of human connection, and very enjoyable.

Every relationship, has every possibility.
Misprint Theatre are back with their second production, ‘Possibilities’ an ambitious take on relationships, from love to friendship and everything in-between.

There are no scene changes, no complicated set, just actors and a story that everyone can relate to. The play is constant and doesn’t end until their story begins…
A new play written, directed by and starring Jamal Chong, with Kate Gwynn.

It is 2002 – another Royal Jubilee year, and HRH (Mary Roscoe) is due to open a new Science wing in a 'sink' comprehensive where Dr Derek Jones … END_OF_DOCUMENT_TOKEN_TO_BE_REPLACED

Dr Anna LaRosa (Dr Stefania Licari) has a lot to say. Just as well, as she’s the only one on stage in this medical comedy, which largely draws its … END_OF_DOCUMENT_TOKEN_TO_BE_REPLACED

Nikhil Parmar’s one-man show, originally written as a TV pilot, manages to touch on a wide range of themes from Islamophobia to modern fatherhood with … END_OF_DOCUMENT_TOKEN_TO_BE_REPLACED

Handel’s 1738 opera Serse (or Xerxes) is an exploration of power, love and human frailty. King Serse falls in love with the voice of his brother … END_OF_DOCUMENT_TOKEN_TO_BE_REPLACED

Lea Salonga has her fans. She also has some superfans, the ones who yell, “I love you Lea!” at almost every opportunity. If that wasn’t enough, there … END_OF_DOCUMENT_TOKEN_TO_BE_REPLACED