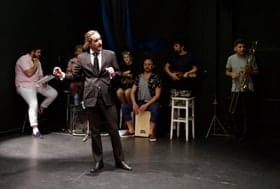 A classic Shakespeare comedy gets a modern take onstage with current fashion and a hip-hopping’ band in Blue Elephant Theatre’s Twelfth Night. This story follows two siblings – Viola and Sebastian – separated in a shipwreck and continue to move forward in life unaware either is alive. Viola (Katie Turner) falls in love with Duke Orsino (Andi Jashari) and disguises herself as a boy to carry out Orsino’s messages of love to Lady Olivia (Eve Niker). Soon the comedy takes a turn as Olivia begins to fall in love with the wrong man… or should I say woman?

Turner was a delightful clown on stage as she bumbled her way around the stage awkwardly. Her dramatic facial expressions and exaggerated character movements were comical, making the play all the more entertaining to watch. Scenes between Turner and Niker were a great representation of Shakespearean wit and humor.

The glue that held this play together was Sian Eleanor Green as Fest and a variety of other roles. Her ability to switch in and out of characters was flawless. Keeping with a clown-like approach, Green gave Fest really genuine emotions in her scenes and embodied a truly silly energy on stage.

It’s easy enough to fall into the normality of Shakespeare with its well-known sonnets and comical scenes. In the corner of the stage sat a keyboard, guitar, ukulele and a microphone waiting for their time to shine. The band was the cast, swapping in and out throughout the scenes adding a twist to this production by singing current pop songs. This talented cast not only knows their Shakespeare, but they know a little music too!

Tucked away in a nice residential area, Blue Elephant Theatre has much to offer, and right now, it’s the whimsical Twelfth Night. Between its modern pop songs and timeless sonnets, Twelfth Night has become a modern classic you don’t want to miss.

A horrific storm separates brother and sister, leaving Viola in an unknown land and needing to protect herself….by dressing up as a man?!

Original Impact return to the Blue Elephant with one of Shakespeare’s most popular plays following the sell-out success of A Working Title last year.

Twelfth Night runs for approximately two hours including an interval