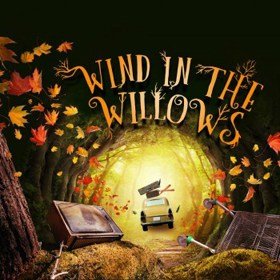 It was my pleasure to attend the Mercury Theatre’s latest production, Kenneth Grahame’s Wind in the Willows, as adapted by Willis Hall. Upon entering the auditorium, we are greeted by the site of a scaffold structure, giving the impression of woods, with many different ins and outs, ups and downs. The stage is decorated with carrier bags, crisp packets and old trollies, influenced by designer Katie Sykes’ observations as she explored the countryside. This ‘junk set’ is used to great aplomb by the cast who create everything needed to tell this classic tale out of whatever they find around them, much as Katie and director Matthew Cullum had noted some of our wildlife making the most of the unfortunate rubbish in their surroundings.

Rebecca Applin’s music, confidently led by musical director Barnaby Southgate, is suitably folky, incorporating a few more bluegrassy elements, and really fills us with the sense of the laid-back countryside lifestyle our characters enjoy. I did feel though, at times, the music overpowered the performers and we missed a few lyrics. This is a miniscule gripe however against what was a wonderfully engaging production.

Cullum’s direction is fun and fancy-free, keeping the pace up and the stage busy, holding the attention of the young audience members brilliantly. There is enough substance, too, to keep the rest of the family switched on. Pete Ashmore, fast becoming a Mercury veteran, is suitably charming as Water-Rat, quickly outlining how life is on the riverbank to Sam Pay’s wide-eyed, excitable Mole.

Kate Adams plays a stern Badger who makes no odds about showing how much she’d rather be hibernating. Simon Spencer-Hyde multi-roles delightfully, particularly amusing as the Gaoler and Louisa Beadel is a sweet-voiced, endearing addition to the ensemble.

Christopher Hogben’s Wild Wooder is appropriately menacing, especially so when tormenting Moley as he travelled to seek Badger’s help. The snowstorm effect of this scene was a favourite of my own young companion for the performance, who was also wowed by the sheer on-stage chaos of Toad’s first car crash. Dale Superville doesn’t fail to impress as the iconic Mr Toad. His loud, proud flamboyant amphibian wins over the audience in moments through his energetic performance.

All in all, from start to finish, Wind in the Willows at the Mercury Theatre is a visual delight, with plenty to keep the youngest of audience members focused and ample gags and physical humour to keep the grown-ups chuckling along too. It does everything a family show needs to do and I hope the success of the Mercury family shows continues.

29th July to 21st August 2016
WIND IN THE WILLOWS
Based on the Novel by Kenneth Grahame. Book by Willis Hall.

Harold Shipman, known to his many patients, family and friends as ‘Fred’, was Britain’s worst serial killer. The official inquiry into his crimes … END_OF_DOCUMENT_TOKEN_TO_BE_REPLACED

Being one of Arthur Miller’s best-made and most challenging plays, The Crucible is also one of his most frequently performed. I was going to say … END_OF_DOCUMENT_TOKEN_TO_BE_REPLACED

To be fair, Linda Lavin called her concert Love Notes, there’s an album of the same name, and that’s more or less what it was about - variations on … END_OF_DOCUMENT_TOKEN_TO_BE_REPLACED

Noughts & Crosses is a euphemism for blacks and whites. The Noughts are the whites and the Crosses are the blacks. In the world of the play, the … END_OF_DOCUMENT_TOKEN_TO_BE_REPLACED

This ‘juke box’ musical offers highly polished, undemanding, feel-good entertainment, showcasing, as it does, 30 songs dating from the 1960s to the … END_OF_DOCUMENT_TOKEN_TO_BE_REPLACED