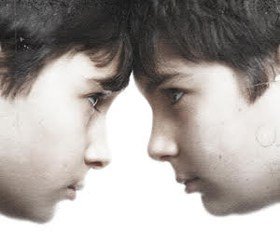 The Write Now Festival at the Brockley Jack is an integral and essential part of the theatre’s yearly programme, and which each year looks to find, develop and produce the most exciting, diverse and significant work of new and emerging writers who have a connection to the south east of London. I was lucky enough to go along to the premier of this year’s overall winner, “Rock Paper Scissors” by Olga Nikora.

In a grim bedsit (or bijou studio apartment with bags of atmosphere if you are an estate agent) two brothers are living together and hating it. Roma (Mateo Rufino) and Mihai (Tice Oakfield) are Romanians who moved to the UK years ago and have reacted very differently to their time here. They are both gardeners (sort of) and as well as living in their cramped flat often work together as well. Roma is cynical, lazy and fairly happy spending his time drinking beer and watching trashy television and complaining about the images he sees. His younger brother Mihai on the other hand is completely the opposite. He has an optimistic outlook on life, studying to become a UK citizen and working to find himself what he considers a ‘proper’ job – wearing a white collar in an office instead of doing manual work. He is helped in his studies by his Irish girlfriend Aine (Amy Malloy) and Charlie (Bruce Langley) the young son of one of Mihai’s gardening contracts. Living and working together in such cramped conditions is fraught with difficulties for both Mihai and Roma.

They constantly bicker over everything – food, noise, sleeping arrangements – you name it they can argue about it. Their animosity to each other is exacerbated by the boy’s shared history back in Romania and their wildly differing memories of their childhood and in particular the relationship they had with their mother. When their arguments escalate and require a final solution, the boys resort to their age old traditional method of settling their differences – a quick game of rock paper scissor. There is really only one thing the two boys agree on – They don’t want to be known as Romanian Gypsies and have no intention of returning back to the old country to live. For all its many faults, the lads consider the UK is by far the better option as a place to work and live their lives. As we follow the foursome and their lives over a very short period, we get to observe how Mihai’s optimism is tested by revelations and he has to do some major growing up once he understands that that his reality is but a dream in so many ways.

“Rock Paper Scissors” is writer Olga Nikora’s first full length play and is a worthy winner of ‘Write Now 6’. The text flows beautifully and really paints a wonderful word picture of the four characters. Designer David Shields has managed to put an entire bedsit (including working water taps) into the Brockley Jack’s space which, while cramped feels completely authentic – this authenticity is assisted by Sound Designer Philip Matejtschuk who adjusts the ambient sound to perfectly reflect, for example the change in levels when a balcony door is opened and closed. Kate Bannister’s direction is first rate and makes fantastic use of the space and her actors. Scene changes, with dimmed lights and slightly robotic movements, work very well to illustrate the passage of time. Tice and Mateo bring the characters of Mihai and Roma to life brilliantly. There is a real feeling that these two have grown up together and managed to find ways to needle each other that only true siblings can. There were times I really wished that I spoke Romanian as the two boys’ hurled insults displaying their intense dislike of each for all to see. And yet, even after doing some unforgivable things to his younger brother, there are moments of genuine tenderness where Roma fulfills the role of supportive older brother to perfection. Bruce Langley’s portrayal of Charlie is wonderfully studied. He manages to be the perfect middle class, liberal intellectual who ultimately has very different feelings about his Romanian ‘friend’ and only at the end allows them to be revealed. Turning finally to Aine. I’m afraid I disliked her from the start, and she never gave me cause to change my mind. A calculating and – to give her the benefit of the doubt – possibly confused girl, she is made human by Amy Molloy beautifully. Even at the end, after everything had happened, I still wasn’t keen on the Irish Colleen, so full marks to the actress there.

I was thinking of a way to finally sum up my thought on “Rock Paper Scissors”. At around 90 minutes with no interval it is an intense and emotional play with, I think one huge underlying message at its heart “The ties that bind us are sometimes impossible to explain. They connect us, even after it seems like the ties should be broken. Some bonds defy distance, and time, and logic. Because some ties are simply… meant to be.” A very apt description of this play which is all about the family we are stuck with whether we like them or not.

Roma and Mihai are brothers sharing a tiny London flat. They fight about everything. Food. Girlfriends. Drinking. Parents. The only thing they don’t fight about is that neither wants to be known as a Romanian gypsy. Rock paper scissors explores kinship and identity, and asks when do we stop being children and when do we stop playing games.

“I’m not a nobody. I been here ten years. This is my home. I’m a local. Everyone back in Romania is real proud of me…I’m a legend there, I am.”
Olga was born in Eastern Europe and moved to New Zealand when she was a child. Olga began writing while studying for her law degree. Her first play Tightrope Bonnie was shortlisted for the Verity Bargate Award. Theatre credits: In the Company of Strangers (Soho Theatre, staged reading); Then they came for me (Greenwich Theatre).

It’s an intricate plot, laced with some subversive humour - that the female character is simply called ‘The Woman’ (Molly Lynch), for instance, is … END_OF_DOCUMENT_TOKEN_TO_BE_REPLACED

Andrea McArdle didn’t, when the 1978 movie Rainbow was released, look or sound like Judy Garland, and she still doesn’t. You’d be forgiven for … END_OF_DOCUMENT_TOKEN_TO_BE_REPLACED

TENNIS ELBOW is the first play that John Byrne has written for thirteen years, and is in fact a companion piece to his critically successful Writer’s … END_OF_DOCUMENT_TOKEN_TO_BE_REPLACED

It’s all a bit banal, really - or perhaps I’m too heavily influenced by some of the other online productions that I’ve seen recently, which deal with … END_OF_DOCUMENT_TOKEN_TO_BE_REPLACED

Mandy Gonzalez is one of those Broadway actresses with a number of dedicated fans and followers, and it’s easy to see why given her sunny disposition … END_OF_DOCUMENT_TOKEN_TO_BE_REPLACED