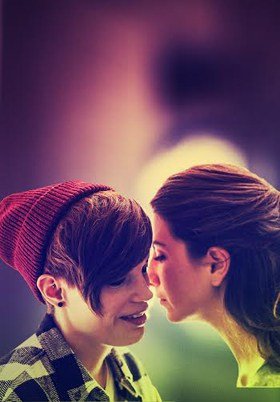 If you’re in a gay relationship and your girlfriend makes the decision to start living as a man, does that mean you’re suddenly straight?

Jon Brittain’s new play Rotterdam discusses gender and sexuality in a timely and heartwarming comedy. It’s New Year in the Dutch port city, and Alice is finally ready to come out to her parents back home in England, when her girlfriend makes an announcement that changes everything. As Fiona begins the journey towards becoming Adrian, Alice is left to try and reconcile the woman she fell in love with to the man he’s turning into.

The play is a fascinating – and very funny – examination of the labels society puts on people: male, female, straight, gay, trans, cis… But more importantly, it’s about the labels we put on ourselves. Alice has finally come to terms with being gay, and now struggles to see herself in any other way, while Adrian is frustrated that people still view him as a woman, when he knows in his heart that he’s really a man.

Brittain’s script successfully combines laugh-out-loud humour and heartfelt emotion to tackle a serious, complex and extremely current subject. It grabs the audience’s attention from the very first scene and makes us really care about what happens to these characters, who are all struggling to stay afloat in the strange no man’s land that is Rotterdam.

The play’s characters are very different people, but all quickly gain the audience’s sympathy in their own ways, due in no small measure to the superb cast. Anna Martine has the challenging task of portraying both Fiona and Adrian, and does so with a touching vulnerability, alongside Alice McCarthy’s uptight and oh so British Alice. Ed Eales-White is genuinely likeable as good guy Josh, and Jessica Clark plays Alice’s Dutch colleague, Lelani, with a delightful energy that’s hard to resist – not to mention a really convincing Dutch accent.

Donnacadh O’Briain’s production flows easily from one scene to the next, with the set changes so smoothly incorporated that it doesn’t really feel like the story ever stops. Ellan Parry’s versatile set, full of concealed doors and cupboards, provides a backdrop to the action, whether we’re inside Alice and Adrian’s flat, in a bar, or on the frozen ice of a Rotterdam canal.

I had high hopes for this play, and I wasn’t disappointed – it’s funny, warm and honest. And so if the end feels a bit too neat, it’s a flaw that’s easily forgiven. At its heart, Rotterdam is a story about human relationships, and what really makes us who we are. And that’s something we can all relate to, whatever our gender, sexuality, age or any other label we can come up with.

‘No Alice, I don’t want to become a man, I just want to stop trying to be a woman.’
It’s New Year in Rotterdam, and Alice has finally plucked up the courage to email her parents and tell them she’s gay. But before she can hit send, her girlfriend reveals that he has always identified as a man and now wants to start living as one.
Now Alice must face a question she never thought she’d ask… does this mean she’s straight?
A bittersweet comedy about gender, sexuality and being a long way from home.

It is the duty of every citizen to answer the call to support and protect the United Kingdom and its allies so last night, while the rest of the … END_OF_DOCUMENT_TOKEN_TO_BE_REPLACED

Harold Pinter only ever wrote one novel. And, let's be honest, he didn’t rush into this literary endeavour. He started it in 1950 and the book was … END_OF_DOCUMENT_TOKEN_TO_BE_REPLACED

How far would you go for the people you love? What lies would you tell? What sacrifices would you make? That’s the question at the heart of The … END_OF_DOCUMENT_TOKEN_TO_BE_REPLACED

“All political lives, unless they are cut off in midstream at a happy juncture, end in failure, because that is the nature of politics and of human … END_OF_DOCUMENT_TOKEN_TO_BE_REPLACED