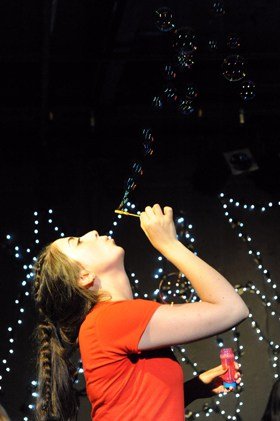 Shall I get the important part out of the way first..? There’s audience participation! Actually that’s not the important bit – I mean I still don’t really know much about Shakespeare and his plays/sonnets. I know, I know, that’s shameful beyond belief. I did however see As You (Might) Like It by Shook Up Shakespeare back in January and that was most enjoyable, so hopefully Midsummer Madness lives up to my expectations. Which I am pleased to say the short answer to that is yes.

The basic premise with Shook Up Shakespeare stays the same, lots of energy, fast paced dialogue, singing, dancing and enough puns to leave you wondering if you’ve ended up in a Carry On film. The set is rather minimal, but that’s all that’s needed. The lighting is functional keeping what you need to see lit. The writing and direction, both by Helen Watkinson, work really well. There are both written and visual jokes throughout with something always happening to keep your attention.

A working knowledge of Shakespeare’s work is likely advantageous as there are times the audience laughed and it felt like I didn’t know the “in joke” due to my minimal knowledge of the Bard’s work, however I didn’t feel that detracted from my enjoyment of the performance at all.

It is impossible to pick a specific stand-out performance as all the cast act superbly and cope really well with anything thrown at them, working together in perfect harmony. I do however think the character of Portia portrayed by Madelyn Smedley is adorably ditzy! I especially like the ad-lib sections when there is audience participation or when something doesn’t exactly go as planned. There are scenes that take a familiar twist with Watkinson’s cap being doffed to both Whose Line is it Anyway and Chicago. I really enjoyed the Whose Line part where an audience member takes control with the Bell of Doom (I may have made that name up!) changing who is speaking and what position they’re in. Great fun to watch.

In my previous review of As You Might Like It I said to keep your eye out for their next production. Did you? Well if not then you haven’t yet missed out as tonight was opening night so grab your tickets if you can. This review is in no way sponsored by the sweets you get during the show!

Join Shook Up Shakespeare for an evening of mad, magical and musical midsummer madness in honour of good old Will, our national treasure: playwright, poet… party planner! How now shall this be compass’d? Canst thou bring me to the party? We promise to transport you back in time to Bankside, the only place to party in 16th century London!
http://www.shookupshakespeare.com/

Already in a good mood because there is abundant free parking after 1.30pm on a Saturday (and all-day Sundays) near the venue, Little Angel Theatre’s … END_OF_DOCUMENT_TOKEN_TO_BE_REPLACED

There’s an air of familiarity for people who have been in the entertainment industry in this narrative. Global pandemic or not, supply always exceeds … END_OF_DOCUMENT_TOKEN_TO_BE_REPLACED

This was originally meant to be called West End Musical Christmas, and got postponed as the Government had no choice but to impose another lockdown - … END_OF_DOCUMENT_TOKEN_TO_BE_REPLACED

Sovereign Song by CrushRoom is an immersive theatre show in partnership with established venue COLAB, which leans heavily on an inspired premise for … END_OF_DOCUMENT_TOKEN_TO_BE_REPLACED