Home » Reviews » Soldier On at The Other Palace Theatre, London | Review 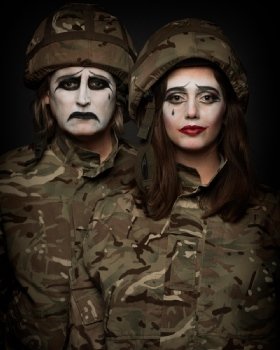 Soldier On, a daring piece of theatre performed by The Soldiers’ Arts Academy adopts a fairly well used theatrical trope: it’s a meta-theatrical play about making a play – nothing we haven’t seen before, right? However, it is not the basic concept that makes this piece new and ground-breaking, it’s the people making it. Soldier On weaves together true stories collected by writer Jonathan Lewis over a five year period of working with British servicemen and women. What is delightful is that it addresses the full spectrum of the British military community, from veterans struggling with PTSD, to retirees, to the carers in the aftermath of war – the wives, mothers and families, who are so often overlooked.

The story tells of a motley crew of veterans and their families, thrown together by the vision of a director aspiring to heal through theatre by giving them the opportunity to tell their stories. This story is fictional, but part of the delight for the audience is piecing together what did and didn’t happen in reality and determining how many of the play’s events actually took place during the conception process. One soon realises the play itself is a storytelling device, a vehicle through which Lewis could present the stories he’d collected. Except that the cast of the real show is made up of a mixture of actors and ex-military service personnel, making the fictional play’s premise a reality.

Another fascinating aspect of this show from an audience perspective was working out who was or wasn’t ex-military. It was genuinely difficult to tell without consulting the programme. The performances of some of the veterans were incredibly strong, most notably Cassidy Little, playing ‘Woody’, an ex-Royal Marine who lost his leg in Afghanistan in 2011 and whose performance on stage was sensitive, nuanced and entirely convincing. The acting was slightly variable, but these were not all professional actors and that was precisely the point. A full cast of trained actors would have undermined this playing around with fiction versus reality. My only slight frustration was the want of an explanation as to who the professional actors were and what qualified them to tell the stories alongside those who had lived them (another issue explored in the play). Having said that there were some truly breathtaking performances from the professional cast. It would be remiss not to mention Robert Portal’s depiction of an officer with prostate cancer which was heart-breaking and painfully sincere.

At times, it felt as though the show didn’t quite know what it wanted to be, between the dance and physical theatre sequences, disparate pieces of pop music and solo song. But in a way, this just added authenticity to the conceit that this is theatre made by people who are not theatre-makers.

These sections felt as if they were devised by a group of military personnel keen to utilise and showcase their individual skills. Some of the movement pieces worked better than others. At their best, combined with the lighting, they provided an excellent artistic vehicle for transporting the audience into what it’s like to engage in combat, at their worst they felt a little wooden. But there were clever details too, like breaking the play into sections titled with technical military terminology to represent the journey of the group from the beginning to the end of the process, which leaned into the comparison between making theatre and war.

It’s a tall order to create a piece that is simultaneously heart-breaking and uproariously funny but the Soldiers’ Arts Academy have definitely succeeded. It is by and about people who are able to see the funny side of even the darkest moments, handled with great sensitivity. Perhaps because it comes from the horse’s mouth, the veterans themselves, the audience is given permission to see the funny side of the tragic. This is a play about Britishness, about ‘soldiering on’, about ‘if you don’t laugh you’ll cry’ while at the same time being allowed to cry. It’s about sharing, about not suffering in silence, about it being OK to not be OK and about knowing you’re not alone. More than anything, this is a play about companionship and about camaraderie. It takes the ‘band of brothers’ model from army culture and translates it into the artistic model, drawing comparisons between the experience of being in a theatrical ensemble and being on the front line, making the theatre of war. With influences from Timberlake Wertenbaker’s Our Country’s Good, Lewis celebrates the power of theatre as therapy and its ability to change lives.

It would be difficult not to be moved by this piece of theatre, seeing how far all the characters have come from start to finish and begin to get their lives back on track. With the company’s motto of ‘you are not alone’, which they extended to any and all of us who are struggling, ringing in our ears as we left, there was not a dry eye in the house.

The play is inspired by true stories which Lewis work-shopped with British servicemen and women and their families over five years. A passionate cast, many of them army veterans, bring their own experiences to life through a mix of storytelling, music, dance and mixed media that is hard-hitting, poignant and close to their own hearts.

With a cast of 16 including injured army veterans, the show explores what really happens when military personnel leave the army – through the journey of a group of soldiers who take up acting to help them recover from PTSD.

With humour, warmth and searing honesty, ‘Soldier On’ lays bare both the shocking and sometimes heart-warming truths about the impact of PTSD – and the very real and often disturbing facts of life faced by some 60,000 veterans in Britain in 2018.

Writer and director Jonathan Lewis was an Army Scholar who was invalided out of the forces in 1986. He went on to drama school and subsequently played Sgt Chris McCleod in two series of ITV’s Soldier, Soldier in the 1990s. Lewis’ multi-award winning hit first play ‘Our Boys” was revived in the West End in 2012 and has just completed an award-winning run at the 2018 Edinburgh Fringe.

Soldier On
The Other Palace
Booking to 24th November 2018

“Keep it shallow, keep it pretty, keep it moving,” declares Justin Vivian Bond, letting the audience determine for themselves what precisely is really … END_OF_DOCUMENT_TOKEN_TO_BE_REPLACED

This play didn’t do that well on Broadway the first time around in 1963, and did worse the second time around, even with a revised script, running in … END_OF_DOCUMENT_TOKEN_TO_BE_REPLACED

One of the very few good things about the COVID pandemic is that the opportunities to live stream theatre performances have increased exponentially, … END_OF_DOCUMENT_TOKEN_TO_BE_REPLACED

Exploring both the Jewish and Christian faiths, Candlesticks in some ways puts forward some good arguments for systems of belief that exist entirely … END_OF_DOCUMENT_TOKEN_TO_BE_REPLACED