Religion plays a larger part in the storylines in Someone Else’s Shoes, a compilation of short monologues, than is usually the case in contemporary shows – and there isn’t an all-out attack on how damaging some religious practices can be. When Lilith Wake’s character (these are all first-person narratives with each character only referring to themselves as ‘I’) in You Say takes about being a ‘good Christian’ it is more about conforming to societal norms rather than devout belief. 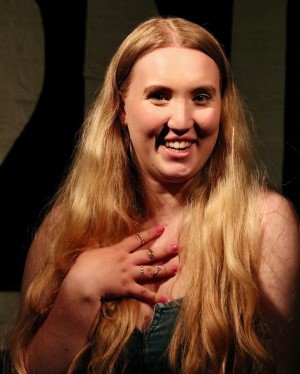 Either way, she seems too chirpy for the Monday morning commute, though it later becomes clear there’s more than an element of sarcasm going on. A consideration of ‘intersectional feminism’ is all too brief, though the monologue as a whole demonstrates what can happen and be discussed in the time it takes to wait for a London bus. The white character of a monologue written by a black playwright (Tolu Fagbayi) decides she will ‘check [her] privilege’, but that, like so much else in this piece, doesn’t really go anywhere. It was rather like a London bus journey that abruptly terminates for operational reasons.

Altar Call by James Tibbles was revelatory and engaging, about a young man who is very much a part of a large evangelical church and has been for some time. During his teenage years, however, he discovered he had strong feelings for another boy, which put him at odds with evangelicalism, whose adherents largely subscribe to a belief best summarised as ‘it’s Adam and Eve, not Adam and Steve’. Encouraged to receive prayer from church leaders for an “unhealthy relationship”, Tibbles’ character receives an epiphany, though it’s almost definitely not the one the evangelicals would deem to be godly. Some self-perceptive humour keeps the narrative down to earth.

Better Off Not by Ellie Birch goes almost immediately for the shock factor, not so much for the nature of a recurring injury, but rather how it came about, and the subsequent repercussions for the character, who is reluctant to do certain things because the problem may reoccur. Reading between the lines, however, the storyline has much to say about how such incidents can affect one’s self-confidence, and just because she can now go back to the kind of activities she liked to do, this doesn’t mean she wants to. Arguably it gets a little more emotional than it strictly needed to be, although the ending does provide a significant contrast to the relative chirpiness, even in the face of adversity, that comes before.

Matt Hansen’s I Have A Voice talks about what it is like for his character to have a stammer, especially one that is far from consistent. There are some very specific and detailed examples of situations where his stammer has led to an uncomfortable situation, particularly during his school years, where he was a target for bullying. I even learnt a new word from his monologue – ‘stammersplaining’. The audience was invited to look it up, though I didn’t feel the need, just as he doesn’t need his own stammer explained to him, ineptly, by someone who has never had a stammer themselves.

The production gave voice to people in society that aren’t usually heard on stage. Each monologue is under fifteen minutes long, which made for a nice early finish, but once the stories really get going, it’s time for them to, well, get going and clear the stage for the next piece. With each of the stories at various stages of development, it’s such an uneven experience that a star rating wouldn’t be appropriate. Nonetheless, it’s a bold and entertaining show.

A series of monologues commissioned and curated by Matt Hansen. Partly inspired by Alan Bennett’s Talking Heads and Mark Gatiss’ Queers, each piece is written with an underrepresented voice in mind, and focuses on true, personal stories. Ranging from heartfelt and dramatic to comedic, this collection of pieces covers socially-relevant topics including speech impediments, body image, sexual liberation and feminism, each in a unique style.

– You Say, written by Tolu Fagbayi & performed by Lilith Wake, is a spoken-word piece about being a young, determined woman in today’s society.

– Alter Call, by James Tibbles, examines the difficulties of growing up in the evangelical church as a closeted gay man.

– Lighter, by Eloise Whittaker, discusses body image and social media. Does Ruby want to conform to the idea of perfectionism in this society, or be who she wants to be freely?

– Better Off Not, by Ellie Birch, explores the anti slut-shaming and sexual liberation of women in the 21st century.

– I Have a Voice, by Matt Hansen, takes the audience into the mind of a young man with a stammer, and reveals the frustrations of struggling to speak through a humorous lens.

Harold Shipman, known to his many patients, family and friends as ‘Fred’, was Britain’s worst serial killer. The official inquiry into his crimes … END_OF_DOCUMENT_TOKEN_TO_BE_REPLACED

Being one of Arthur Miller’s best-made and most challenging plays, The Crucible is also one of his most frequently performed. I was going to say … END_OF_DOCUMENT_TOKEN_TO_BE_REPLACED

To be fair, Linda Lavin called her concert Love Notes, there’s an album of the same name, and that’s more or less what it was about - variations on … END_OF_DOCUMENT_TOKEN_TO_BE_REPLACED

Noughts & Crosses is a euphemism for blacks and whites. The Noughts are the whites and the Crosses are the blacks. In the world of the play, the … END_OF_DOCUMENT_TOKEN_TO_BE_REPLACED

This ‘juke box’ musical offers highly polished, undemanding, feel-good entertainment, showcasing, as it does, 30 songs dating from the 1960s to the … END_OF_DOCUMENT_TOKEN_TO_BE_REPLACED