Home » Reviews » Stewart Francis: Into The Punset at Edinburgh Fringe 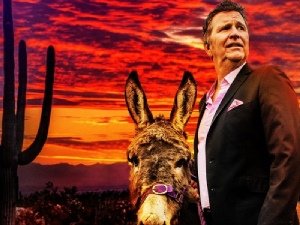 I’ll start at the end, partly because, for Stewart Francis, this is (sort of) the end. He’s not called his show Into The Punset for nothing, and wishes to do more acting in future, so he’ll stop doing the stand-up comedy circuit at the end of this year. This may, at least in part, explain his ‘be thou offended’ stance as he knocks out one-liner after one-liner in the manner in which his fans and followers have become accustomed to. But his sense of humour is not for everyone – a lady directly in front of me took umbrage with her companions for laughing as hard as they did. On the other hand, someone did say to me afterwards, quite rightly, that there is a need to control one’s laughter because of the speed with which joke after joke is delivered.

Not everything in this show is entirely new material either – a gentleman next to me was practically reciting a few of the anecdotes as he had heard them before, though I hasten to add he was happy to chortle away all the same. There is something a bit cheap and tacky about the use of exaggerated sound effects in a show that is amusing enough with just the punchlines. Francis also seems to derive some pleasure in making even his unassuming Edinburgh Fringe audience gasp: “Pret A Manger. They make a killer sandwich.”

There are milder ones to enjoy, or groan at, as some of them do come across as the kind of jokes one would find in a Christmas cracker. “My electrical puns are the best on the circuit,” he muses, and for the purposes of the various gags, by his own admission, he would have a very generous supply of siblings – and wives. “John F Kennedy was the fourth, of hopefully five, US presidents to be assassinated,” he explains, ostensibly to younger members of the audience.

Some of the gags are, to be frank, inappropriate with a capital I – but this is, I suppose, what makes Stewart Francis appealing to his followers, who will doubtless miss his presence at the Fringe and elsewhere on the comedy circuit. The consistency of certain stories is very good, bringing to mind earlier jokes. It seems to me that he’s quitting while he’s ahead, OR (he has a penchant for shouting ‘or’ before delivering the same joke with an alternative punchline) as he previously put it: “I used to have a job as a pantomime horse, but I quit while I was a head.” Business as usual to the end for this popular comedian.

Ladies and gentlemen, Mr Stewart Francis is saddened to announce that this will be his LAST EVER run at the Edinburgh Fringe Festival.

Yes, sadly it’s true. After donkeys’ years of doing stand-up at the festival, Stewart is saying a fond farewell to the crowds and locations that have made his humble profession such a joy for all this time. It’s a sad time, yes, but how is he going to mark it – do you think? Why, in the only way he truly knows: jokes, jokes and more jokes. Stewart Francis is finally heading off… INTO THE PUNSET.