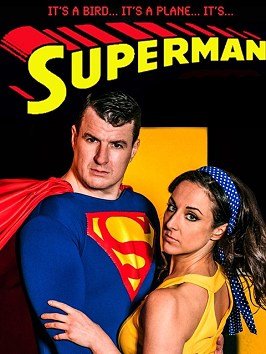 Before he turned the comic Annie Warbucks into a stage show that just saw its third screen adaption in the cinemas early this year (2 film versions and one Disney TV Film), there was another Comic hero Charles Strouse gave his musical talents to. As a comic created by Jerry Siegel and Joe Shuster and published by DC Comics, Superman has been seen in many forms. Mainly, the highly successful film and series adaptations. But a musical? Does it work? It’s not Spiderman Turn of the lights! But instead, this 1966 musical called It’s a Bird, It’s a Plane, It’s Superman is brassy, colourful and very funny. It has some of the most beautiful songs written for the stage, so, one wonders why it never was a hit. Although camp and outdated, its witty lyrics written by Lee Adams, “Tell me please, when will he learn, it’s not some silly fly-by-night affair? Or why must I, the Man of Steel feel as helpless as a man of straw? They used to hold me in such awe; now their cheers have turned to jeers” and Book by David Newman and Robert Benton It’s a Bird,… gives us a parody of the original 1950s Superman series which starred George Reeves as the Man of Steel and even more so the 1940s radio show starring Bud Collyer as the Man with the Red Cape.

London’s Leicester Square Theatre’s Man of Steel is Craig Berry, who brings the dual character to life with his good looks, baritone voice and his comical mimics. Dancing is not his strongest skill though even if the director (Randy Smartnick) puts him at the back of the number. Sadly a skill most of the cast members suffered with. One exception was Michelle LaFortune who played Lois Lane, she seemed to be dying to show off her dancing skills… if only the part asked for it. Vocally strong, she swayed over the stage like a ballerina missing out the meaning behind the lyrics and the characterisation of the score.

We know the basis of the story… if not, where have you been all your life?

Both working for the Daily Planet, Lois lane is in love with Superman. Clark Kent/Superman is in love with Lois Lane, but as Clark Kent, he can’t give away he is Superman and his alter ego, is a bit of a nobody. OK, now for the show’s thin story. 10 time Nobel losing Scientist, Dr. Abner Sedgwick (Jonah Hill Look-a-like Matthew Ibbotson), seeks vengeance for being snubbed by the scientific world, and his evil plan to destroy his nemesis, Superman, the symbol of good… Superman wins and gets the girl.

The evening belonged to Sarah Kennedy as Sydney. Gossip Columnist for the Daily Planet, Max Mencken’s Secretary, who, after giving up on Max, played by Paul Harwood, finds a crush in shy Clark Kent. Sarah Kennedy found the perfect balance between caricature, on which this production relies far too heavy on, and comedy yet with an underlining believability.

Having transferred from the little stage of the fringe theatre Ye Olde Rose and Crown Theatre pub in East End’s London to the much bigger stage of the Leicester Square Theatre, adjustments had to be made. That’s probably why there were moments, actors were left standing in the dark, lights were shone into the audience, blinding the view of what was going on stage. Sets reset at crucial solos. And Dances were out of sync.

My highlight of the evening didn’t come from the show, but from a lovely Scottish couple in the audience. The missus had given her very skinny husband, the musical as a Christmas present, because he dresses himself up as superman in the bedroom and they just had bought him his first Christmas present that day… Yes you’ve guessed it, A Superman outfit.

So all I can say is … This Musical is for everyone.

It’s a bird, It’s a plane, It’s Superman
Presented by arrangement with Tams Witmark Inc. (Based on the Comic Strip SUPERMAN)

Is the tale of Superman’s efforts to defeat the vengeful Dr. Abner Sedgwick, a ten-time Nobel Prize-losing scientist, who seeks to destroy the world’s symbol of good. Superman also comes into romantic conflict with Max Mencken, a columnist for the Daily Planet newspaper who is intent on revealing Superman’s true identity, as he resents Lois Lane’s attraction to Superman.

The dazzling score is by Charles Strouse (Annie) and Lee Adams (Bye Bye Birdie) and has a book by David Newman and Robert Benton who would go on to write the screenplays for Bonnie & Clyde and several of the Superman movies.

Following a successful Sell-Out Production of the UK Premiere of IT’S A BIRD… IT’S A PLANE… IT’S SUPERMAN at Ye Olde Rose and Crown Theatre, Walthamstow, London, this high flying Musical Comedy transfers to the Leicester Square Theatre for a limited Run of just 10 Performances.

Titus Andronicus is not usually a comedy, it is usually a bloody, villainous and vengeful tale, but tonight it is a comedy and a rather amusing one at … END_OF_DOCUMENT_TOKEN_TO_BE_REPLACED

This show is not without clichés - there are three of note in this production. Firstly, the French horn of the show’s title is personified, speaking … END_OF_DOCUMENT_TOKEN_TO_BE_REPLACED

There’s very little in the way of set in this show: aside from chairs, a few crash barriers and at one point, a red carpet, the actors’ movements … END_OF_DOCUMENT_TOKEN_TO_BE_REPLACED

South African born, but raised on the Isle of Man, Pierre Novellie is a true raconteur rather than just another 'stand-up' comedian. He says about his … END_OF_DOCUMENT_TOKEN_TO_BE_REPLACED

This show, Willy Hudson began by saying, is about himself. It is written by himself, is directed by himself and executive produced by himself. Almost … END_OF_DOCUMENT_TOKEN_TO_BE_REPLACED