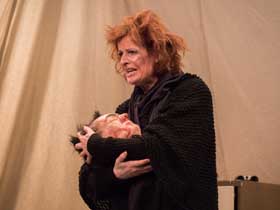 Edward Bond has been feted over the years as one of this country’s leading playwrights and there’s no doubt “Saved” his seminal 1965 work helped change British theatre forever by fighting the Lord Chamberlain’s censorship laws and helping with their abolishment in 1968.

Now over fifty years on from “Saved” comes Bond’s latest work based somewhat on Medea, the Greek tragedy in which which she kills her children in an act of revenge against her adulterous husband Jason.

The play is in the three acts. The first sees Dea murdering the twins before being immediately raped by her husband. We then fast forward sixteen years or so where a seemingly now sane Medea turns up at her ex-husband’s house where she meets Oliver – the son she’s never met. She might seem sane but the events that follow, prove that she most certainly isn’t.

The third scene takes place somewhere near the war zone where a by now totally insane Dea is living in a caravan in a bleak almost post-apocalyptic setting. One of the soldiers from her son’s regiment arrives. He seems to be suffering from post-traumatic stress and proceeds to take orders from the head that Dea has kept.

Now if this sounds like a lot of boring, pretentious nonsense, it most certainly is. Now it’s possible that Bond is trying to show us that power corrupts, that war sends people mad and that son’s have oedipal complexes about their mothers – or maybe it’s none of these things. In recent interviews, Bond has railed about the blandness of current British theatre and there’s no doubt that this is not a bland evening at the theatre! But it is very long and tedious and could have done with some considerable pruning. One of the problems is that Bond has directed the play as well as writing it and it needs the editing skills that an outside director would bring. Also the staging is very ordinary with a very clunky and lengthy scene change in act one where the audience became distinctly restless as stage hands moved the furniture. Also the acting of the fifteen strong cast leaves a lot to be desired with only Helen Bang as Dea shining as a beacon of light in a very difficult and demanding role. The other actors barely lift themselves above the Am Dram level and the fight scenes also fail to convince.

Bond himself in his programme notes says “I write of the rape of a corpse with a beer bottle to bring back some dignity to our theatre”. Dignity seems a strange word to use in this context. “Saved” may have changed theatre in its time – this play certainly won’t. Sutton Theatre’s deserve a lot of credit for bringing a world premiere of a play by a leading playwright, to a suburban theatre but unfortunately they may have picked a loser here.

“To be sane or not to be sane, that is the question – and if not, then be mad and all that follows.”

In his new play Edward Bond takes from the Greek and Jacobean drama the fundamental classical problems of the family and war, to vividly picture our collapsing society.

The war is raging, Dea, a heroine, has committed a terrible act and has been exiled. When she meets someone from her past she is forcefully confronted by the broken society that drove her to commit her crimes.

The background stays largely the same throughout the performance, and appears to resemble the hairstyle of Elle Woods (Courtney Bowman). Regardless, … END_OF_DOCUMENT_TOKEN_TO_BE_REPLACED

Everyman is one of the earliest printed plays, originally written in Middle English and first performed around 1510. It is a morality play, popular … END_OF_DOCUMENT_TOKEN_TO_BE_REPLACED

After being closed for over two years due to covid, the Arcola Theatre has re-opened with Barney Norris’s love song to the people who raised him, We … END_OF_DOCUMENT_TOKEN_TO_BE_REPLACED

Now in its 15th year, La Clique have firmly established their place on the world burlesque circuit and this year’s London cast bring their infamous … END_OF_DOCUMENT_TOKEN_TO_BE_REPLACED