You are here: Home / Reviews / Sydney Theatre Company’s Waiting for Godot at the Barbican 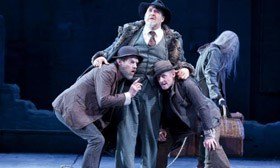 What would you consider to be ‘the most significant English language play of the 20th century’? There are so many to choose from! In a Royal National Theatre poll of 800 playwrights, actors, directors and journalists, the answer to this question is Samuel Beckett’s play “Waiting for Godot”. I’m ashamed to say I had never previously got around to seeing a production of this, but the Barbican is currently mounting a Samuel Beckett season so I was lucky enough to get a chance to see The Sydney Theatre Company production.

The premise for the play is relatively simple. Two unkempt, tramp-like men Vladimir (Hugo Weaving) and Estragon (Richard Roxburgh), are standing in a bleak landscape with a single, dead looking tree waiting. They talk, well to be honest they ramble and bicker a lot, discussing problems with boots, being attacked and the possibility of hanging themselves from the bare branch of the tree. After a while, Estragon wants to leave but Vladimir reminds him that they are waiting for the arrival of Godot. While they wait, we learn more about the characters. Estragon likes jokes but Vladimir can’t tell them as he has a kidney issue that stops him smiling. Suddenly the two are joined by Pozzo (Philip Quast) a loud bombastic man, and his servant, the silent Lucky (Luke Mullin) dropping under the weight of Pozzo’s luggage. In the course of the discussion between the four we learn that Pozzo is really not a nice man, he is selfish and horrible to Lucky. Eventually they leave and a boy comes to tell Vladimir and Estragon that Godot will not be coming today but will be there tomorrow. Act I ends in the moonlight with the boys standing, waiting.

Act II starts just as Act I, except the tree appears to be sprouting leaves. Is it the next day or has a longer period of time elapsed between acts? This is where the audience really start thinking for themselves – in fact my companions and I were still discussing it this morning – particularly as the rest of the act – another meeting with Pozzo and Lucky – a hat and a pair of boots do everything they can to confuse and confound the issue of time and purpose for our two heroes Vladimir and Estragon.

Going to be really honest now. When I left the opulence of the Barbican’s theatre I was genuinely confused as to what I had just seen. There is no doubting that the production itself is superb. The magnificent Barbican stage seems to be small and very intimate thanks to Andrew Upton’s staging and Nick Schleiper’s excellent lighting of the post-apocalyptic looking set brilliantly created by Zsolt Khell. And the acting itself cannot be faulted. Hugo Weaving and Richard Roxburgh extract every ounce of personality from Vladimir and Estragon, being so comfortable with each other that even the silences between the characters don’t seem forced or wrong but the sort of silence that good friends can have without feeling the need to fill the vacuum with some fatuous comment.

So, nothing to fault on the production but I really wasn’t sure about the ultimate meaning of the play which, I have to say left me feeling frustrated and unfulfilled. Doing some research today, apparently I am not alone in this. Every nuance of the play is open to interpretation by the audience and this really is a show where every single person watching will have their own highly individual view of the message of the show. Heading home, my companions and I came up with separate interpretations involving dead people, blind dates, wormholes through space and a whole host of others.

Ultimately then, “Waiting for Godot” is an amazing production that three hours after the lights first go down will leave you scratching your head and thinking about it for a long, long time to come.

Giving standout performances as Samuel Beckett’s quintessential comedy duo, Richard Roxburgh and Hugo Weaving shine in this remarkable production of Waiting for Godot, the absurdist masterpiece about everything and nothing.

Burdened with aching feet and bladder problems, Estragon and Vladimir pass the time near a tree. Joking, bickering, musing on the profound, the down-and-out pair wait patiently for Godot, interrupted only by brutish Pozzo and his hapless servant Lucky.

Australian screen and stage stars Weaving and Roxburgh draw out the vaudevillian energy, wild humour and poetry of Beckett’s writing. Surrounded by a handsomely bleak set, suggestive of a charred, crumbling theatre, their shared endurance test is a touching reminder of humanity’s talent for resilience.

The Australian cast includes Oliver Award-winning Philip Quast, alongside Roxburgh and Luke Mullins who recently received 2014 Helpmann Awards – in the Best Male and Best Supporting Male categories respectively – for their roles in this production.