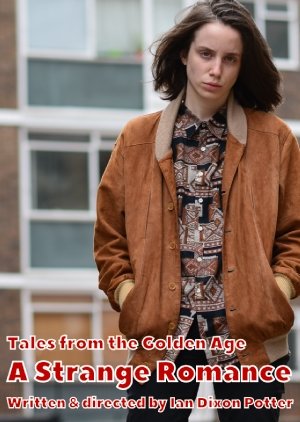 As the agony of live theatre is far from at an end, so The Golden Age Theatre Company continues its online ‘greatest hits’ series, Tales from the Golden Age. The fourth of the tales is A Strange Romance, a 40-minute monologue directed by Ian Dixon Potter who has simplified his own play, Boy Stroke Girl, first produced at the Warren in Brighton as part of the 2016 Fringe.

As with the original, A Strange Romance poses a simple question – if one is fortunate enough to fall in love with another human being, does it matter how the other define themselves in terms of gender? The ramifications of that question are considered by Peter, a charismatic car mechanic, here portrayed by Thomas Everatt who, with his Clive Owen looks, seems to be the very definition of masculinity. Peter relates his first encounter with an individual named Blue and the progress of their ensuing relationship. Everatt is absolutely compelling in the role and, while many might suppose that – in Peter’s position – we would have known, Everatt persuades us not only that we wouldn’t but also, and more importantly, that knowing or not knowing is missing the point about love.

For some of those immersed – or drowning – in the current quagmire of identity politics, the approach in A Strange Romance might, at least superficially, seem to be overly binary. However, by the end of the play, anyone who feels that way has surely not been listening carefully enough and, while Peter’s closing words may frustrate some, others will feel that Dixon Potter provides exactly the right answer to his own question.

As with other monologues from Golden Age, the videography could be more effective but this matters little given the fiercely intelligent script and Thomas Everatt’s faultless performance.

Can you fall in love with someone if you don’t know their gender? Peter is about to find out when he falls for the sexually ambiguous ‘Blue’.
Their relationship poses a challenge to Peter’s identity, forcing him to face some difficult questions: To what extent are we all encouraged to conform to narrow culturally defined stereotypes, to label and to pigeon-hole ourselves? Are these labels a form of straightjacket, by adapting to them do we compromise our true nature and can we defy the ultimate label of gender?

Casting caution to the wind, Peter’s passion for Blue provokes prejudice and hostility from friends and family in a tale of sexual liberation and shattered taboos.