Sadler’s Wells was predictably packed for this annual February visit by Tanztheater Wuppertal. This time they are performing Kontakthof ( Courtyard of contact), often described as one of Pina Bausch’s most significant works which premiered in 1978. 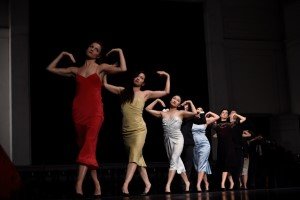 However, after a sometimes testing one hour forty minutes of at times laboured repetition without the relief of an interval some of the audience couldn’t wait to leave the room. Overheard was someone as she escaped to the bar, ‘I got excited every time I thought the interval was about to happen and then they started something else.’

This, therefore, is an evening for those who have a knowledgeable reverence for Pina Bausch and her company and have an interest in following its continuing evolvement into a new era beyond her singular presence, she died in 2009. For them, this is a show they will want to see, for everyone else it is probably too long at 3 hours with a twenty-minute interval.

The first hour of the show which is performed by the 22 dancers on stage mostly throughout, is very engaging. The soundtrack is an evocative collection of twenties and thirties music, predominantly European, as a soundtrack virtually Fellini. Tanztheater (‘dance theatre’) grew out of German expressionism in Weimar Germany and 1920s Vienna and so we are taken back to the start. To a more conventional era in terms of public expectations of interactions between men and women while underneath bubble all that we remain darkly familiar within the power arena of male and female relationships.

There is an empathetic connection as we are shown the absurdity, tragedy and futility of ourselves, fun and laughter at the depiction of human beings endeavouring in all the same ways to make themselves appealing in the hope of attracting a connection of souls, despite our relentless ordinariness, despite our destructive emphasis on the surface of things.

What an eye Pina Bausch had for the nuance and desperate truths of the battle of the two sexes in the 1970s when Germany was also a divided country, part-restrained by militarised, systematic violence

There are 22 dancers on stage almost throughout. The men are dressed in a variety of suits and ties, describing a uniform that binds them as tightly as they seek to bind and control women. Dressed mostly in tightly fitted dresses in jewel and pastel colours the female dancers might be butterflies with scathing bites but those same dancers are transformed when dressed in black, describing in an instant a different tone.

The darkness in the interactions between men and women is always near as those familiar with Pina Bausch’s work will know. Some of the violence depicted still has the power to shock, working to provide a warning to be alert to potential danger despite the decades passing since 1978.

The ensemble performance of different walks repeated across the stage, often processional to a singular rhythm, sometimes depicting the random movement of all our days, sometimes creating the impression of uniformity remains astonishingly effective.

But there is too much repetition of detail watching this piece from what was once a far off future. We know about these issues between the sexes, they are no longer revelatory as they must have been in 1978. Watching many variations hammering the same theme over and over again feels like reading a novel from long ago in which there are many lines that resonate and will be marked but there is also much to be skimmed.

This is a shock to those of us who are long-time Pina aficionados. Is it that we are missing the familiar cast always bringing with them on stage the shadows and weight of their former roles and knowledge and affinity for Pina? This is a talented new young cast we are watching, only four have danced the work before. We know this company must move forwards.

The last twenty minutes of the overlong section before the interval loses connection completely. Whatever was attempting to be communicated was utterly lost.

Some of the audience did not return for the shorter second act. They missed a rewarding part which made one think of the political aspects of joyless conformity, of the Weimar period to 1933 leading to the rise of fascism with Hitler gaining power. Of the repression and division by a repressive system of conforming men when this work was created. The suits became uniforms, the men turn feral looking for control, requiring silence except for the bland.

This implicit criticism of over imposed conventional moires eases some of the gnawing concern that had surfaced by the interval of the lack of visible racial diversity in the cast ( though the dancers come from all over the globe) and the binary characteristics attached as only male or female described on stage. We are exploring new issues now. You are left at the end wondering how cutting edge Pina Bausch would choreograph this time if we were lucky enough to still have her with us.

One of the most important pieces in Pina Bausch’s repertoire, Kontakthof was created when she was establishing her place in the world of dance. Seen in a new light following conversations during the pandemic surrounding social issues such as sexism, racism and cultural appropriation, Kontakthof is more poignant than ever. During the pandemic the company took time as an ensemble to discuss these important social issues which affect their daily work, to gain new insights into certain scenes.

Kontakthof displays power struggles that are present beneath the surface. The desire for love, appreciation and equality, the need to be seen and the futile hope that the other person can fulfil one’s uncommunicated wishes. This is a constant battle that plays out in the rituals of the Kontakthof.

There’s a warm and welcoming presence about Katie Arnstein anyway, although offering a sweet to audience members as we filed in helps too. Also, the … END_OF_DOCUMENT_TOKEN_TO_BE_REPLACED

The on-stage tiling makes it feel very much like certain scenes are set in a swimming pool, which may be stating the obvious but in a performance … END_OF_DOCUMENT_TOKEN_TO_BE_REPLACED

“I am a little bit of a nerd,” smiles Joe Sellman-Leava, playing himself, or at least a version of himself he’s willing to portray to audiences at the … END_OF_DOCUMENT_TOKEN_TO_BE_REPLACED

This is the kind of show that will preach largely to the converted, if not the choir itself, although this is probably by default rather than design. … END_OF_DOCUMENT_TOKEN_TO_BE_REPLACED

Cabaret is not just the name of a highly successful musical and film, but according to my good buddies at Wikipedia is a form of theatrical … END_OF_DOCUMENT_TOKEN_TO_BE_REPLACED