Home » Reviews » Tartarus & Other Stories at the Space Theatre | Review

When Max Easton’s character begins by emphatically declaring he’s a cowboy, and ends by emphatically declaring he never was a cowboy, it doesn’t take a genius to work out that not everything’s okay with regards to his state of mind. But then the monologue is called Spaced Cowboy – and I must confess I found much of it rather disorienting. I couldn’t decipher whether the narrative was that of a dystopian future or one with an imagination run wild, or a combination of both – either way, it was the ultimate escapist plot, or it would have been if the absurdism in the piece had really gone to extremes. 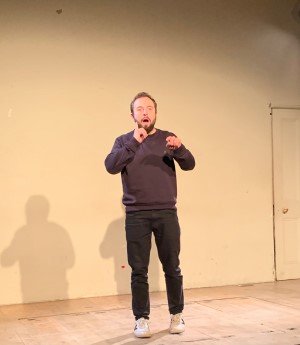 Perhaps our man has some form of post-traumatic stress disorder: the planet as we know it is, for some reason, no longer inhabitable, so he somehow finds himself in space, not having been exterminated. There are – surprise, surprise (not) – plans underfoot for a new world, though I wouldn’t exactly call it a new world order, given the lack of detail as to how a global community better than the one now apparently defunct would operate.

He encounters a number of people and animals with whom he has conversations with (yep, it’s that kind of show), and yet never quite shakes off a consistent feeling of being unloved and unnoticed.

That, if nothing else, is relatable, particularly for those who went for days or even weeks at a time without a face-to-face conversation in those days of lockdown. Oh, and something about crowded tube trains was mentioned in the first minute or two.

Tartarus, by contrast, was only occasionally impenetrable: Will (Oliver Longstaff) determines, for instance, that the heart and mind are where “layers of the soul are nurtured”, but then goes on to assert that all souls are “doomed” (readers of a certain age will recall Private Frazer in the BBC Television sitcom Dad’s Army) because the heart and mind are conditioned by the world in which we live. Shaped and influenced by, say, family, school and society in a person’s formative years, Will seems to take the polar opposite view of organised religion: rather than being born with ‘original sin’ that requires divine intervention in order for it to be removed, one is actually born pure, before life comes along and corrupts us. It’s like one of those deep conversations with a friend or housemate that goes on until the small hours.

He begins by telling a story about his ex-girlfriend in secondary school, but soon backtracks in favour of speaking about his most recent partner. Some highly detailed accounts of their time together make the story credible – after all, good times tend to be very memorable. The play’s critical incident was as sudden as critical incidents in contemporary plays tend to be, though this one did not come across as contrived or implausible. As the old adage would have it, better to have loved and lost than never to have loved at all.

Relying on the art of storytelling, both parts of this double bill are paced well, structured well, and acted well. There’s room, perhaps, to expand both stories, but then again, it is better to leave the audience wanting more than to test the audience’s patience. A thoughtful and engaging experience.

Tartarus & Other Stories features 3 monologues of 3 men who have very different stories but are all experiencing mental health problems. Their stories are emotional and tinged with sadness but still remain warm and dare I say hopeful. Each story is slightly surreal but I like to think that the audience will leave thinking, with everything that is going on in this world, we need to keep hold of hope.

The 3 stories being told are I Live On Uranus, Spaced Cowboy and Tartarus.

If the audience were to be exposed to full versions of the seventy-four songs listed in the programme, it would be a very long show indeed. I suppose … END_OF_DOCUMENT_TOKEN_TO_BE_REPLACED

How can a play be both charming and devastating? Through its tight script, abundant humour and pitch-perfect performances, 4th Country manages to … END_OF_DOCUMENT_TOKEN_TO_BE_REPLACED

Britain, so a London cab driver once told me, is obsessed with the Second World War, as though it happened just recently. Power Luncheon would seem, … END_OF_DOCUMENT_TOKEN_TO_BE_REPLACED