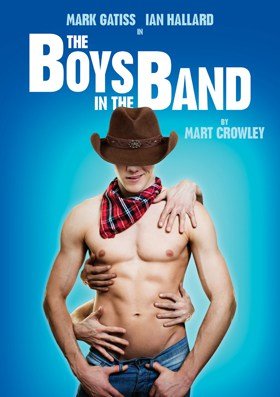 This is a revival of Mart Cowley’s classic play, The Boys in the Band. The play was deemed shocking when it was first performed Off-Broadway in 1968.

Set in a New York apartment which is adorned with portraits of Hollywood greats such as Judy Garland and Marilyn Monroe it tells the story of Michael (Ian Hallard) who is busily organising a birthday party for his friend Harold (Mark Gatiss) when he receives an unexpected visit from Donald (Daniel Boys) and a phone call from former college roommate, Alan (John Hopkins) who is in town and would like to pop round. The party starts well with plenty of banter traded amongst the group. The brilliant soundtrack is used to the full including a fun dance (which seemed to be enjoyed by the cast and the audience). Following the arrival of the guest of Harold and Alan, Michael decides it would be “fun” to play a game of emotional Russian roulette…

Well directed by Adam Penford, the play boasts a stellar cast; Ian Hallard gives an excellent performance as the uptight Michael; Hallard is well supported throughout the play by Daniel Boys (Donald) in particular. James Emory is brilliantly camp/waspish as Emory, whilst John Hopkins manages to convey Alan’s confusion/anger on entering the group very well. Jack Derges gives a fun performance as Harold’s “present” from Emory, (Cowboy). Ben Mansfield and Nathan Nolan (bickering couple, Larry and Hank) and Greg Lockett (Bernard) also give good performances and the cast complement each other very well. However, the stand-out performance was from Mark Gatiss (Harold). Gatiss times his delivery perfectly as the sneery/simpering Harold.

Tom O’Connell and James Seabright in association with Jack Maple, King’s Head Theatre and Park Theatre present The Boys In The Band by Mart Crowley

Mark Gatiss stars in the first major revival of this iconic play in almost 20 years. Razor sharp and packed with wit, The Boys in the Band is fresh, startling and brilliantly entertaining.

Nine men gather in a New York apartment for a birthday celebration. Harold (Mark Gatiss) receives a surprise gift from his friend, Emory (James Holmes), in the form of a beautiful male hustler (Jack Derges). Meanwhile, party host Michael (Ian Hallard) gets an unwanted surprise of his own. As the booze is drunk and the dope smoked, the mood swings from hilarity to heartbreak.

The Boys In The Band
Plays until 30th October 2016
Park Theatre
https://www.parktheatre.co.uk/

Book Tickets for The Boys in the Band

How can a play be both charming and devastating? Through its tight script, abundant humour and pitch-perfect performances, 4th Country manages to … END_OF_DOCUMENT_TOKEN_TO_BE_REPLACED

Britain, so a London cab driver once told me, is obsessed with the Second World War, as though it happened just recently. Power Luncheon would seem, … END_OF_DOCUMENT_TOKEN_TO_BE_REPLACED

William J Dunleavy, author and star of this monologue play, is a writer and face to watch. He enters the room (as the staging is more geared towards … END_OF_DOCUMENT_TOKEN_TO_BE_REPLACED

Cirque du Soleil’s Luzia is a joyful whirl through a psychedelic Mexico, which reminds us why live theatre is so special. Anyone who goes to … END_OF_DOCUMENT_TOKEN_TO_BE_REPLACED