Home » Reviews » The Comeback at the Noël Coward Theatre | Review

“Two are better than one; because they have a good reward for their labour.” So says the 1611 King James Bible (Ecclesiastes 4:9, if you really wanted to look it up). Ben Ashenden and Alex Owen, who are – I am reliably informed – known as The Pin, play themselves, or versions of themselves, as well as doubling up as Jimmy and Sid, veteran variety performers who are returning to the stage for a ‘comeback’ tour for their loyal fans (or, as the cynic in me would have it, a tour they had to come out of retirement to do because HMRC wanted their proverbial pound of flesh). 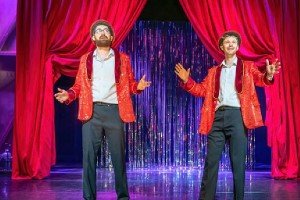 There is, a post-show schoolboy Google search reveals, an actual place called Didlington, a village in Norfolk, with a population so small it is not recorded separately in the Census figures but included in the civil parish of Ickburgh. Suspension of disbelief, therefore, is required as this show takes place over the course of an evening at the Didlington Arts Theatre, presumably a once-glorious venue that has seen, rather like Sid and Jimmy, better days. Alex is the overly enthusiastic one, leaving Ben to be the (relatively speaking) sterner one trying to keep things professional. They are the warm-up act to Sid and Jimmy, and all it takes is a swift costume change for the same actors to reappear as the main acts.

But it’s more complicated than that, because, in one of the various attempts to gain the upper hand thanks to the presence of Clint MacKay, apparently a famed motion-picture director, Ben finds himself impersonating Sid. Quite why comedy performers think Hollywood would want to hire them for their movies based on an evening of comedy sketches was rather lost on me. Every so often the pace of the production slows, and the sketch goes on a bit longer than perhaps it ought to. The second half is pacier and more engaging than the first, if only because by then one has become (sort of) used to the sheer silliness of proceedings.

The dynamic duo is supported by (as the cast list would have it) Charlie Ferguson and Alex MacKeith. At surface level, it appears they don’t have much to do, though the discerning eye will figure out what is really happening in the pacier scenes, especially when all sorts of props of various shapes and sizes are appearing from different directions with exquisitely accurate comic timing. Some breaches of the fourth wall occur, though the ‘audience participation’ bit thankfully falls to a ‘celebrity guest’ – the writer and broadcaster Sandi Toksvig (host of the BBC Television panel quiz show QI) at the performance I attended – whose own performance, perhaps expectedly, was very warmly received.

Whilst not exactly devoid of strong language, there’s a gentleness to this kind of humour that isn’t always found in contemporary comedy. Some of it is subversive – I don’t think I’ve ever laughed at a tasering before – and some of it manages to be both cringeworthy and hilarious at the same time.

There’s a snowball effect as the comedy builds and builds to a largely feel-good and satisfying conclusion. Its previous West End run truncated by London moving to Tier Three (remember that?) in December 2020, it’s just the simple and light-hearted tonic in these still complicated and uncertain times.

The Comeback, a brilliantly original and hilarious new comedy, is set to delight all generations at the Noël Coward Theatre this July. This debut play from The Pin’s award-winning Ben Ashenden and Alex Owen – ‘destined to become one of the great comedy duos’ (Radio Times) – tells the story of two double acts fighting to wrestle control of the most chaotic, farcical and high-stakes gig of their respective careers. Directed by Emily Burns, The Comeback will have audiences doubled over laughing and wiping a tear away at the end with its heart-warming exploration of bittersweet nostalgia and the enduring power of friendship. This show is a much needed dose of feel-good, dizzying escapism with real emotional heart, and a celebrity guest each night to boot.

Up-and-coming comics Ben and Alex have been booked in the warm-up spot for a beloved but fading double act’s comeback tour. Neither duo are delighted to be playing to a sparse crowd in a sleepy, seaside town, but when it’s revealed that a Hollywood director is in the audience, both acts glimpse a final chance for their big break. Cue sabotage, mistaken identity and full on farcical mayhem, as the performance descends into a desperate battle for the limelight.

The descriptions of what happens in this show are so vivid that paradoxically they leave nothing to the imagination – and, at least at the performance … END_OF_DOCUMENT_TOKEN_TO_BE_REPLACED

As theatre productions go this is a memorable, magical experience filled with heart and love and so many tiny thoughtful details, that I’m not sure a … END_OF_DOCUMENT_TOKEN_TO_BE_REPLACED

There are no props at all in Dog, and yet despite a dog, Roy, being very much a key character, the staging and dialogue are more effective than they … END_OF_DOCUMENT_TOKEN_TO_BE_REPLACED

Be astonishing. That’s Derek Jarman’s exhortation to the world at large and - at the end of the show - to this particular audience. And in this … END_OF_DOCUMENT_TOKEN_TO_BE_REPLACED