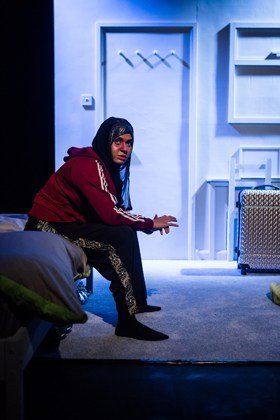 The Diary of a Hounslow Girl, a survey of life as it is for a young Muslim, Shaheeda (Ambreen Razia), in twenty-first century London, is a fascinating insight into a world I admit to knowing little about. I did wonder whether this was going to be something along the lines of a working-class version of “Bridget Jones’ Diary”; thankfully, it is much deeper than that.There is, of course, much discrimination that is still sustained by Muslims in London. This isn’t really the focus of Shaheeda’s story, which looks (as did Bend It Like Beckham when it played in the West End) at the tension between upholding traditionalist family values and living in a progressive, modern capital city.

It’s a very incisive story, and although there are quotes from Shaheeda’s mother spoken in her first language, there are also enough metaphors and similes included in a well-written script to make Shaheeda, her situation, her friends and family, and so on, easily understandable. One relative apparently has as much personality “as Andy Murray”.It is an impressively detailed account – a diary indeed – with even superficial facts, points and figures of speech revealed, all adding credibility to an already realistic tale. Only occasionally does the production drag, and it never feels like it’s getting bogged down in all the details.

It can be bold to the point of bluntness in parts, telling it like it is; but after such a bombastic and almost lightning-paced start, things could only eventually slow down – and if certain shows start slow and build to a frenetic finish, this does the opposite.In hindsight, there is much less that separates growing up in a Muslim home in Hounslow from a secular one in Harrow or Hornchurch than the play suggests.

This ‘diary’ (though in not so many words) has “MUM, IT’S NOT FAIR!” ‘written’ in large block capitals, and I assert that it’s not just female Asian Muslims out there who have, at some point in their childhood, been told they cannot go out tonight but if they insist on going out tonight, which they are, could they please go back upstairs and change into something suitable for a normal person.Perhaps that is precisely the point that Razia is trying to make in this production. Her acting is so riveting that in the moment, I took her character’s side and felt that things really were unjust and unfair; ‘Mum’ even objects to Shaheeda having a Facebook account (in true teenager rebellion style, she retains it anyway and updates it all the more). On the other hand, with the whole story being told purely from Shaheeda’s perspective, I can’t help thinking that the way in which other characters are portrayed may be itself, ahem, unfair. But it’s Shaheeda’s story, and, encumbered by dissenting voices, there’s never any difficulty in following what’s going on.I do wonder whether shows of this nature are, in effect, preaching to the choir and the clergy; how many (reputedly) excessively controlling parents would either allow their offspring to attend a theatre performance like this, or come along themselves? All the more enjoyment for the rest of us, I suppose, in this laugh-out- loud production: a scene at a wedding could have come straight out of something like.

Razia’s performance, flitting between different characters (she even plays Shaheeda’s boyfriend Aaron) is certainly energetic and passionate, and the audience is, for the most part, addressed directly. That’s why it’s so absorbing. This simultaneously amusing and poignant show reminds us that behind every seemingly surly and irascible teenager is a person just as human as we are.

Hounslow Girl is the third production from Black Theatre Live, a pioneering consortium of 8 regional theatres committed to increasing the amount of Black and Ethnic Minority theatre on the touring circuit. It follows Black Theatre Live’s previous success with Macbeth as well as the recent tour of Pitch Lake Productions’ She Called Me Mother, starring Bafta award nominated actress Cathy Tyson.