Home » Reviews » The Dresser is an intriguing and compelling production 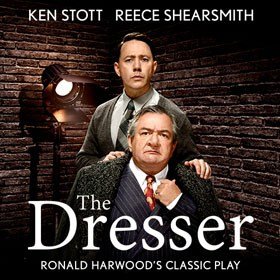 I recall doing a tour of the London Palladium a few years ago, in which we explored almost every area, including the offices, basement and the ‘royal loo’, but not the dressing rooms, which were off-limits on account of them being personal spaces for the cast. The Dresser, which a note in the programme pointedly assures both its own cast and other theatricals that it is entirely fictional, goes straight to where ‘behind the scenes’ theatre tours dare not: the dressing room of a principal, named only as Sir (Ken Stott). His dresser, Norman (Reece Shearsmith) patiently copes with Sir’s demanding nature.

Shearsmith puts in a thoroughly convincing performance. His character’s presence is missed whenever he is off-stage, and he captures the role with astonishing rigour and authority. His strongly emotive final monologue was utterly mesmerising, and encapsulates such a seemingly effortless and natural rendering. I will even go so far as to say there may be accolades for Shearsmith when the awards season rolls around again. But despite this and a general sense of urgency that there tends to be backstage the closer the start time of a performance gets, this production was surprisingly slow-paced in the first half, and my mind was quite able to momentarily turn to external thoughts without losing my place in the plot.

Stott plays a forceful but ultimately unthreatening Sir, and there is much humour to be enjoyed in the conversations between the two male lead characters, with the occasional wry comment and even, dare I say it, some subliminal good and useful advice for would-be actors. But occasionally events in the narrative are so extreme that the show gradually has an artificial feel about it. Even so, a scene between Sir and Irene (Phoebe Sparrow) was made all the more awkward and disturbing in the light of Donald Trump’s recent remarks about women. Of the supporting roles, Simon Rouse’s Geoffrey Thornton was so heartfelt and sincere, and Harriet Thorpe’s Her Ladyship (that is, stage wife to Sir) was as comical as she was poignant.

A fellow theatregoer said to me at the interval that he thought this is a show best enjoyed by people who already have a strong interest in theatre. On reflection, I agree. Most of the characters in this play, engaging enough as they are, and their behaviour, will hardly entice people who don’t already attend productions to begin doing so. The Dresser is a godsend play for theatricals, and it is they – actors and producers sat in the audience on press night – who rose to their feet, almost as one, in rapturous applause at the end. And this was something more than actor friends of cast members being supportive and encouraging: they were genuinely very moved by what they saw.

I did like the way the set moved about – and that’s all I can say about that without giving too much away, suffice to say that set designer Michael Taylor has done brilliantly with a portrayal of life during World War Two. Ronald Harwood’s script is strong and sparkling. Even the critics aren’t spared from Sir’s acerbic wit. We live in different times now, and the sort of man Sir was simply doesn’t exist anymore. Or does he? I’m not inclined to name names, suffice to say the odd story about a leading actor’s less than exemplary conduct continues to leak out every so often. And presumably it’s still the dresser that deals with the brunt of it, at least in the first instance. Overall, an intriguing and compelling production.

Olivier Award winner Ken Stott and BAFTA Award winner Reece Shearsmith come together as lead actor “Sir” and Norman “the dresser” in this eagerly awaited revival of “a wonderfully affectionate and intelligent play about the theatre” The Guardian.

Both hilarious and poignant, The Dresser explores the relationship between two men who are reluctantly and inevitably co-dependent. As World War II rages, backstage in a provincial English theatre, an ageing, once-famous classical actor is troubled. Sir, the last in a dying breed of great English Shakespearean actors, is unwilling to take to the stage to deliver his renowned portrayal of King Lear. It falls to his faithful dresser Norman to rouse another great performance from him, to keep both the show and its star from falling apart.

Renowned as Ronald Harwood’s greatest play, The Dresser has been nominated for Olivier and Tony Awards as well as an Academy Award for the screenplay of the film. With a multi-award winning creative team of Ken Stott (Rebus, God of Carnage), Reece Shearsmith (The League of Gentlemen, Inside Number 9) and Sean Foley (The Ladykillers, Jeeves and Wooster) this promises to be an unmissable production of a theatrical classic.