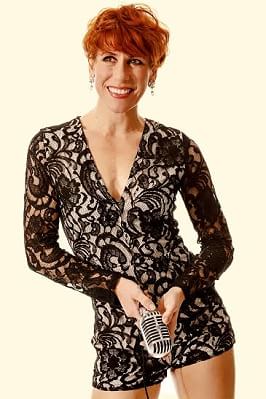 When one gets asked that silly question “If you could live in one era which era would it be?” I always reply immediately “The golden twenties in Berlin”. So you can imagine my happiness when I had the chance to go and see the first evening of the cabaret season of The Follow Spot, produced by West End On-Sea, at a rather well hidden venue called Proud Cabaret City. The ever brilliant Anna-Jane Casey was headlining the cabaret that night. The venue, heavily influenced by the musical Cabaret, is a timeless treasure; red coloured interior, lounge music, quirky and friendly staff, all set the scene for a wonderful evening ahead. When booking you have a choice of just the ticket or the ticket and a 2 course meal. After a quick look at the menu I regretted I had the ticket only. The drink prices are just above standard.

Our compere for the evening was the talented Jess Robinson. Having played LV in The Rise and Fall of Little Voice, she took every chance over the course of the evening to show off her impressions through a little game she calls Impression Cocktail. She invites couples in the audience to each shake a cocktail shaker containing strips of paper – one with artist names on them and the other with songs on them. On stage appeared the likes of Marlene Dietrich, Marilyn Monroe, Shirley Bassey and Sharon Osbourne, Cheryl Cole, visiting EastEnders. There was no stopping this extremely talented entertainer.

The first guest was Tim Newman, one of the London Cast members of the musical Memphis. He showed off his range singing challenging songs with his angel like voice. Although his introductions to the songs were a bit hit and miss, his renditions of Stevie Wonder’s Lately, or Lives In Me from the musical Memphis, were sung with such purity and emotion, you could hear a pin fall. He was accompanied by the brilliant musical director of the night, Simon Pickering on piano.

Comedian Laurence Owen, was the second guest of the evening and it soon became apparent that this 25 year old was more than a stand up artist. Using witty and clever lyrics he sang his way through a series of movie characters. From Disney to westerns to a song about the villain’s henchmen in the James Bond movies. He did not only make his mark as a comedian, but also as a singer and composer that imitated the original material perfectly but without risking a lawsuit.

The band for the evening, led by Simon Pickering the band was equally impressive. “I have been looking forward to working with Anna-Jane Casey for a few years now” Simon told me excitedly. His chance was coming up as the star guest was announced. With a cup and a tea pot she jumped onto the stage while the audience rose to their feet. “These shoes are killing me” she told us, and immediately we were all drawn in. This star of the West End stage has been in the most famous musicals, Cats, Grease, Starlight Express, Chicago to name only a few. There was a time she seemed to be on every West End stage. You also might recognise her from television series like EastEnders, Holby City, The Bill and she even lent her voice for a little show called Family Guy. “What I do is not what I am. Just because I do musicals, doesn’t mean I sing it” she said, starting her set off with Amy Winehouse’s version of Will You Still Love Me Tomorrow. Talented people usually don’t stick at one thing and Anna-Jane Casey is no different because she had brought her ukulele with her and was very eager to show how well she can play it.

Anna-Jane Casey and the band seem to have become one and the glow of the audience filled through the room. “Because I do them, doesn’t mean I love them” she said, before jumping straight into her next song a musical parody set to the music of Sondheim’s Getting Married Today. Her choice and balance of songs was impeccable, she took the audience through an eclectic mix of genres. Name dropping on the way, but wouldn’t you if you can call Curtis Stigers and Seth Macfarlane your friends? Being in Forbidden Broadway at the Vaudeville Theatre, she gave us a little treat by singing the Song Johnny One Note as Liza Minelli. Through the evening she mixed laughter with tears and the tears came with a Kate Bush song. “Kate Bush wrote this when she was 15 years old” she informed us before bringing us a very intimate version of The Man With The Child in his eyes. Another one that brought tears to the eyes was La Vie En Rose by Edith Piaf – a part she played with rave reviews. Nearing the end of the evening, she gave the band a deserved rest, while she picked up her ukulele once more and gave an intimate version of Clown by Emeli Sande. I never thought the ukulele was an interesting instrument – I was wrong.

If every The Follow Spot this season is like this evening, I am sure this gem of a cabaret event will become bigger and bigger, which I dread. This kind of entertainment is too rare and should have a wider audience but it belongs in a venue like this. Needless to say, I floated all the way back home.

This show is not without clichés - there are three of note in this production. Firstly, the French horn of the show’s title is personified, speaking … END_OF_DOCUMENT_TOKEN_TO_BE_REPLACED

There’s very little in the way of set in this show: aside from chairs, a few crash barriers and at one point, a red carpet, the actors’ movements … END_OF_DOCUMENT_TOKEN_TO_BE_REPLACED

South African born, but raised on the Isle of Man, Pierre Novellie is a true raconteur rather than just another 'stand-up' comedian. He says about his … END_OF_DOCUMENT_TOKEN_TO_BE_REPLACED

This show, Willy Hudson began by saying, is about himself. It is written by himself, is directed by himself and executive produced by himself. Almost … END_OF_DOCUMENT_TOKEN_TO_BE_REPLACED

The rough and tumble of secondary school life is not a time I recall with fondness by any stretch of the imagination – at the time, if anyone said, in … END_OF_DOCUMENT_TOKEN_TO_BE_REPLACED