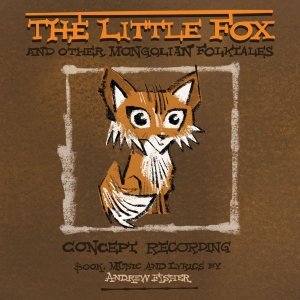 It’s not often I learn something new (other than information about the recording in question, of course) just by reading the album’s notes. A ‘ger’ is what people in Mongolia call a ‘yurt’ – a portable tent structure. As details of various sizes, types and so on can be read about elsewhere online, I won’t elaborate further here, but suffice to say each household in this musical has one. To misquote Animal Farm, however, some gers are more equal than others.

The Little Fox and Other Mongolian Folktales sounds like a series of mini-stories, though various narrative strands are put together to make a whole narrative. Like a soap opera, it flits between different homes and workplaces and back again, but in such a way that the listener is not left confused. Indeed, given the family-oriented nature of the story, it may even labour the point about this being set at the beginning of spring.

Anthropomorphism is nothing new in theatre – one only has to think of shows like Cats and The Lion King. There’s something other-worldly about the music, which often sounds suitably orchestral but nonetheless quite far removed from contemporary Western society. Mind you, corporate greed still manages to manifest itself, in the form of the Rich Herdsman (Soyombo Eukhsaikhan), with the Foolish Servant (Misheel Enkhtur) being exploited. The modern equivalent might well be someone being paid the minimum wage: in other words, the Rich Herdsman would pay his staff even less if it were not for the law.

The use of an entirely Mongolian cast is all part of what is quite an ambitious project, and one that would probably have had an entirely different outcome without composer and lyricist Andrew Fisher having immersed himself several times in the life and culture of Ulaanbaatar, the capital city of Mongolia, working with numerous local creatives in the development of this musical. There are many recognisable elements to the musical numbers, however – there are harmonies in places, and songs rise and fall in intensity and volume dependent on the strength of emotion at any given moment.

I also got the feeling some of the lyrics explained concepts to a Western audience that a Mongolian one would already be familiar with. I doubt the locals would require an entire musical number describing what “the Buddha’s naming day” is all about (an event in which animals were assigned to the twelve-year Mongolian calendar). This level of detail, however, makes these stories accessible, with absolutely no need to do any ‘homework’ or background reading before immersing oneself in this recording.

The story proceeds steadily – it’s unhurried, to say the least, and in the right hands, a full production could prove to be a spectacle. The potential for creativity with visuals, staging and costumes (amongst other things) is almost limitless, constrained perhaps only by budgets. Whilst there are morals to be taken away from these stories (think Aesop’s Fables), a musical theatre happy ending ensures that all’s well that ends well. If anything, it’s an absorbing introduction to Mongolian folklore, whose lessons are remarkably timeless.

On Monday 7th September, SimG Records, the leading independent British label devoted to new musical theatre writers and artists, is to release THE LITTLE FOX AND OTHER MONGOLIAN FOLKTALES.

The Little Fox And Other Mongolian Folktales is a two-act children’s folk opera with book, music & lyrics by
Andrew Fisher. It intertwines four tales with Mongolian folk musical melodies, Mongolian instruments and techniques, and combines them within a western popular musical sensibility. The stories selected, which feature across a range of published Mongolian folk legends, include The Wise Judge, The Fool And The Moon, Why The Camel Rolls In The Ashes, and The Faithful Little Fox.

Andrew Fisher, composer, lyricist and book writer, has successfully created music for theatre, film and TV and
has worked on Emmy-winning and BAFTA, Emmy and Golden Globe-nominated projects.

The Little Fox was recorded in Ulaan Bataar, Mongolia at the prestigious White Arch Studio with a professional Mongolian cast and musicians, the physical album comes complete with a 32page full-colour booklet including synopsis and lyrics.

Physical CDs are available to pre-order now from
www.SimGProductions.com, and will be available digitally in early 2021.

I wouldn’t exactly say Ben Forster appearing as himself in this musical comedy is a career highlight (he is, after all, someone who has played the … END_OF_DOCUMENT_TOKEN_TO_BE_REPLACED

It’s an intricate plot, laced with some subversive humour - that the female character is simply called ‘The Woman’ (Molly Lynch), for instance, is … END_OF_DOCUMENT_TOKEN_TO_BE_REPLACED

Andrea McArdle didn’t, when the 1978 movie Rainbow was released, look or sound like Judy Garland, and she still doesn’t. You’d be forgiven for … END_OF_DOCUMENT_TOKEN_TO_BE_REPLACED

TENNIS ELBOW is the first play that John Byrne has written for thirteen years, and is in fact a companion piece to his critically successful Writer’s … END_OF_DOCUMENT_TOKEN_TO_BE_REPLACED

It’s all a bit banal, really - or perhaps I’m too heavily influenced by some of the other online productions that I’ve seen recently, which deal with … END_OF_DOCUMENT_TOKEN_TO_BE_REPLACED