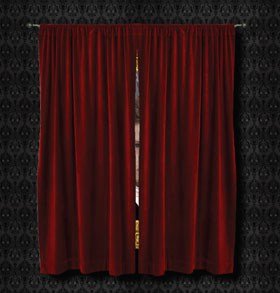 “The only way to get rid of a temptation is to yield to it.”
That is what I have been saying for years and will continue to live by that mantra.

My dear readers I am once again at the White Bear in Kennington. I like coming here, as it is my “local” so I can pop out, enjoy some theatre and be back in my ivory tower with a glass of Rioja and a scotch egg by 9.30. This time I am here to see another adaptation of one of my favourite plays by one of my favourite authors. (Yes, I do know that it was originally a novel and not a play!)

Having witnessed Oscar Wilde annihilated in the past, I am always aware that the next production that I see has the possibility of being another disappointment. However, being the eternal optimist that I am, I never let that stop me from going along to see what the next adaptation will contribute to the world of theatre. This time… I was NOT disappointed. Upon entering the auditorium, we walk straight in on Basil Hallward, musing incessantly upon his artwork. Lord Henry Wotton is there, desperate to view the piece. A silent dialogue goes on between the two as the audience take their seats. The frustration with the painting of both characters is palpable, as is their opposing reason.

I must comment on the stage set by Marcio Santarosa. Having worked at and seen performances at The White Bear, I know what a difficult space it can be to set and have impact without making it cluttered or overdone. Here it has been achieved perfectly. The style is such that as a viewer one instantly has a feel for the period. However, it is also has enough ambiguity that it is easily seen as different locales throughout. In addition, a chandelier, however small gets a thumbs up every time from me!

I’m sure that I don’t need to go into detail about the story at this particular juncture. Regular readers of mine will know how verbose I can become. I will assume that you all know at least the basic principle of the tale so I will concentrate on the production.

There wasn’t a weak performance here at all. The dialogue was delivered in beautiful R.P., which makes me a very happy reviewer. For me though, the stand out player was John MacCormick (Basil Hallward). From the beginning he had an electrifying stage presence. One was able to feel his frustrations with the painting, his companions, and indeed with himself. It was never overplayed however but there was always a feeling that, at any point this fellow may have exploded with emotions. In addition, Harry Burton had an awful lot to deal with and, despite a couple of minor hiccups conveyed a most convincing portrayal of the despicable Lord Henry Wotton. As a character, he does get some of the best lines. “You must have a cigarette. A cigarette is the perfect type of a perfect pleasure. It is exquisite, and it leaves one unsatisfied. What more can one want?” and “Men marry because they are tired; women, because they are curious: both are disappointed.”

Being two favourites of mine. Although, unless I missed it, in which case I wholeheartedly apologise the quote “There is only one thing in the world worse than being talked about, and that is not being talked about.” was omitted. Please do not let me mentioning these two actors take anything away from the rest of the cast though. I repeat that there was not a weak performance.

If there is to be a criticism it is that the fact that this adaptation appeared to have a great leap of 18 years or so. Maybe if it had been a longer, 2-act play as opposed to a one, 90-minute production then this may have been addressed. Nevertheless, this is just a minor issue which doesn’t spoil the enjoyment overall and may well have been overlooked by a less scrutinising viewer than myself (it is my job, after all!) Also, having been abandoned by Mr Smith yet again, then I have no snippy comments to add. I am starting to think that I should be holding auditions for another sidekick, now but that’s a discussion for a different forum!

To conclude then, if you are a Wildean or a novice to the world of dear Oscar, then this current offering will not disappoint you. Do go along to The White Bear and see it for yourselves.

“The only way to get rid of a temptation is to yield to it”
The Picture of Dorian Gray is Oscar Wilde’s dark and witty parable investigating hypocrisy and the many manifestations of greed.

Based on the adaptation by John Osborne, this production (celebrating 125 years since the story was first published) is a cocktail of murder, impeccable aphorisms, beauty and bravura. Humour mixes with horror to provide an elegantly savage version of Oscar Wilde’s only novel. “Without a shadow of a doubt, he helped to change the face of postwar British theatre” Michael Billington on John Osborne

Titus Andronicus is not usually a comedy, it is usually a bloody, villainous and vengeful tale, but tonight it is a comedy and a rather amusing one at … END_OF_DOCUMENT_TOKEN_TO_BE_REPLACED

This show is not without clichés - there are three of note in this production. Firstly, the French horn of the show’s title is personified, speaking … END_OF_DOCUMENT_TOKEN_TO_BE_REPLACED

There’s very little in the way of set in this show: aside from chairs, a few crash barriers and at one point, a red carpet, the actors’ movements … END_OF_DOCUMENT_TOKEN_TO_BE_REPLACED

South African born, but raised on the Isle of Man, Pierre Novellie is a true raconteur rather than just another 'stand-up' comedian. He says about his … END_OF_DOCUMENT_TOKEN_TO_BE_REPLACED

This show, Willy Hudson began by saying, is about himself. It is written by himself, is directed by himself and executive produced by himself. Almost … END_OF_DOCUMENT_TOKEN_TO_BE_REPLACED