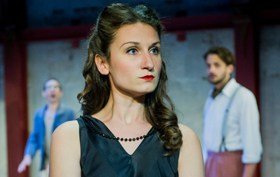 A revival of a J.B. Priestley play, The Roundabout has rarely been performed since it was first produced at the Playhouse, Liverpool in December 1932.

Set in 1931 it tells the story of the Kettlewells who are a dysfunctional family. Richard (Brian Protheroe) is an old Etonian whose business ventures are failing. During a weekend at his country pile, whilst discussing his woes with lifelong friend, Churton “Chuffy” Saunders (Hugh Sachs) he is unexpectedly visited by his estranged daughter, Pamela (Bessie Carter) , who has recently returned from Russia, a passionate communist, Pamela has Comrade Staggles (Steven Blakeley) in tow. Added to this mix are Richard’s mistress (who he’s trying to end things with) and, at the invitation of Pamela, his ex-wife.

The Roundabout boasts a stellar cast who work very well together. Bessie Carter in her first professional theatre role gives an excellent performance as Pamela, playing both her mischievous and vulnerable sides well. Carter’s character also undergoes a fabulous change of appearance going from an awkward boyish look in khaki shorts to glamorous, elegant young lady. Hugh Sachs, as the observant and wily Chuffy, is also excellent and has some of the best lines (including responding to a comment that he jumps to conclusions with “I have to, it’s the only exercise I get”! Standout performance for me was from Steven Blakeley as the much mocked oddball Comrade Staggles. Blakeley’s delivery of lines and comic timing is first class. The rest of the cast give great performances complementing the main characters (Pamela and Richard) well.

The set and costumes are stylish depicting the elegance of a lunch party at a Country House. Hugh Ross’s direction is in keeping with the tone of the piece. Whilst the play doesn’t really have much of a plot it is worth seeing and is a funny and perceptive look at English life in the 1930s.

Cahoots Theatre Company in association with The Other Cheek and Park Theatre present the first major revival of
The Roundabout by J.B. Priestley

The Roundabout is a delightful comedy by one of Britain’s most prolific playwrights J.B. Priestley, beloved for such classics as An Inspector Calls and Time and the Conways. Described by The Spectator as “remarkably good entertainment,” it has subsequently disappeared from view.

The Kettlewells are a dysfunctional family. Richard is an old Etonian whose business ventures are failing. Over one crowded weekend, his daughter Pamela, whom he hardly
knows, returns from Russia, a passionate communist; his ex-wife and mistress both turn up; and his butler has a big win at the races.

The Roundabout is a funny, touching, highly perceptive look at England in the 1930s, when it looked, just possibly, as if the social order might be changing.

The Roundabout
Plays until: 24th September 2016
Book tickets for The Park Theatre
https://www.parktheatre.co.uk/

How can a play be both charming and devastating? Through its tight script, abundant humour and pitch-perfect performances, 4th Country manages to … END_OF_DOCUMENT_TOKEN_TO_BE_REPLACED

Britain, so a London cab driver once told me, is obsessed with the Second World War, as though it happened just recently. Power Luncheon would seem, … END_OF_DOCUMENT_TOKEN_TO_BE_REPLACED

William J Dunleavy, author and star of this monologue play, is a writer and face to watch. He enters the room (as the staging is more geared towards … END_OF_DOCUMENT_TOKEN_TO_BE_REPLACED

Cirque du Soleil’s Luzia is a joyful whirl through a psychedelic Mexico, which reminds us why live theatre is so special. Anyone who goes to … END_OF_DOCUMENT_TOKEN_TO_BE_REPLACED