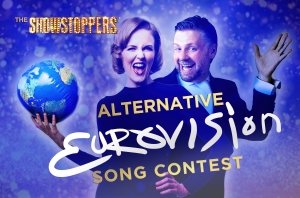 Coronavirus or COVID-19 has a lot to answer for. Jobs lost, the economy at a standstill, me working from home and dressing only in tee-shirts and shorts to name but a few. However, no matter what else it has caused, Coronavirus can never be forgiven for the cancellation of this year’s Eurovision Song Contest.

How we look forward to the annual festival of having our hopes raised by the selection of some song that this year would be the one, then watching as the votes came in. The ritual of listening to Graham Norton getting more relaxed, and putting it all down to those darned voting groups when the UK came in the bottom three. So thank goodness then for the Showstoppers who have put on The Alternative Eurovision Song Contest – LIVE!.

Hosted by Pippa Evans and Andrew Pugsley (who also did a sterling job in editing the videos) the show consisted of sixteen performances covering most of the countries you would normally find gracing the stage of Eurovision. The contestants were:

With commentary by Tom Allen, and Eurovision facts from Tony Cordial (Philip Pellew), the show started with Latvia and then went through the various countries. There was the standard Eurovision style intro video and then the song which, in a break from the real show, lasted about a minute and a half, which is something Eurovision might consider in the future. One of my favourites was Portugal’s entry, ‘Familias Felizes (Happy Families)’ which took the Eurovision style to wonderful extreme with a singing animal puppet performing the song. But my absolute favourite was the Czech Republic’s entry, ‘Sad Clown’ which did so much to raise awareness of the plight of penguins worldwide. In a surprise twist, the individual acts had the chance to vote for their favourite performance of the show, and just like the normal Eurovision voting, there was a lot of politics in play.

On top of everything else, we had a divine set of celebrity pundits in the shape of Christopher Biggins, Arlene Phillips, London Hughes and Claire Sweeney all of whom gave us their opinion of the various songs.

The great thing for the audience was that we got to vote for our favourite, whilst donating money to The Care Workers’ Charity Emergency Fund: https://www.thecareworkerscharity.org.uk. When the votes were counted, The Czech Republic were robbed as Germany romped home to victory.

Yes, there were a few problems with microphones at points, but it didn’t matter. The show was such fun. If Graham Norton is ever thinking of retiring from commentary, then Tom Allen is going to be a worthy successor to take over the role.

With a running time of around 80 minutes, it sped along nicely and the fun never really stopped. The music was very, very Eurovision so full credit to the team involved – Musical arrangements, production and keys: Duncan Walsh Atkins, Christopher Ash and Jordan Clarke. Percussion: Alex Atty and Craig Apps, Guitars: Dylan Emery and Justin Brett – for an amazing set of individual and distinct numbers.

The show was excellently put together with the right level of Eurovision cheesiness and pizzazz really holding the attention. And all in all The Alternative Eurovision Song Contest – LIVE! Was a wonderful production that had all the elements we have come to love about Eurovision.

Not only that but, by the time the show ended £6,370 had been raised for The Care Workers’ Charity Emergency Fund, which is more than the real Eurovision has ever managed.

Featuring brand new songs parodying your favourite Eurovision genres, The Showstoppers invite you to join them as they attempt to recreate the OTT production values, high camp, and musical merriment of the world-famous competition, in a hilarious evening complete with commentary and interactive voting, all from isolation in their own socially-distanced homes across the UK.

Each song will be written and recorded by The Showstoppers and the guest stars themselves in collaboration with the company’s musical directors – Duncan Walsh Atkins, Christopher Ash and Jordan Clarke.

Presenters: Pippa Evans and Andrew Pugsley
The Man with the Stats: Philip Pellew

From Azerbaijan to Turkey… the singers and their competing songs

Christopher Biggins
Biggins has been a household name for 30 years. An actor, media celebrity, TV personality and compere, the Grand Dame of Pantomime and above all a generous good doer, he was crowned King of the Jungle as the winner of ‘I’m a Celebrity… Get Me Out of Here’ in 2007 and he won ‘Celebrity Come Dine With Me’ in 2009.

Arlene Phillips
Multi Olivier Award-winner and Tony Award nominee Arlene Phillips is a showbiz legend honoured as a CBE for her services to dance; she has worked with stars from film and TV, to theatre and arenas, as well as becoming one of Britain’s favourite television judges.

Claire Sweeney
Actress, singer, dancer and TV presenter, Claire was most recently seen on stage starring as Irene Roth in ‘Crazy For You’, Baroness Bomburst in ‘Chitty Chitty Bang Bang’, and Velma Von Tussle in ‘Hairspray’ and toured in the hit show ‘Sex In Suburbia’, which she co-wrote, following its hugely successful run at the Royal Court Liverpool. She guest-starred as Maxine in the hit ITV comedy ‘Benidorm’, and hosted her very own weekly musical theatre-themed show on Magic FM.

Tom Allen – Commentator
Comedian, writer and actor, Tom started as a stand up at the age of 22 and went on to win both ‘So You Think You’re Funny’ in Edinburgh and the BBC New Comedy Awards in the same year. He has appeared on ‘8 Out of 10 Cats Does Countdown’, ‘Mock the Week’, ‘Celebrity The Crystal Maze’ as well as the John Bishop Show and Channel 4’s Comedy Gala at the O2. He co-hosts ‘Bake Off: The Professionals’ and joined the 2018 series of ‘The Great British Bake Off: An Extra Slice’ as a regular contributor.