I am always very excited to come across a new theatre, and Esher Theatre is a real ‘find’, conveniently situated near to Esher High Street and right by a large car park which is free after 7pm. Front of House Staff are charming and face mask compliance was excellent. I felt extremely comfortable, and I will definitely be checking out future productions. 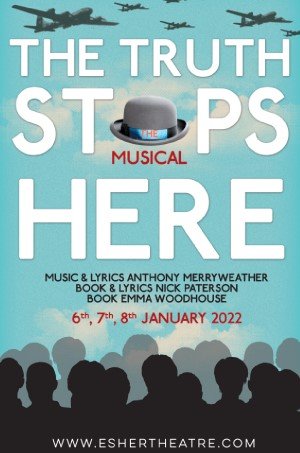 The Truth Stops Here is the story of the Bethnal Green Tube Disaster, the largest loss of civilian lives during World War II. 173 people mainly women and children were killed in a crush while attempting to enter the tube station which was being used as an air-raid shelter.

The wartime government decided to play down the scale of the disaster to preserve morale. The true death toll was not revealed until 2012. A memorial ‘The Stairway to Heaven’ was created at the site in 2017 nearly 75 years after the disaster.

Anthony Merryweather the producer came up with the idea of writing a musical about the London Underground during the Blitz and has also written all the songs which are quite brilliant, very powerful and catchy. I particularly enjoyed “Inside my Heart”, “The Premonition” and “It’s a Disaster”. Notable performances include Abigail Helsby as Esther, Daniel Stark as David, Jessica O’Toole as Paula, Rosalind Helsby as Mabel and Oliver Paterson in multiple roles.

There were a few problems with the sound, some of the higher notes were spoiled by feedback and the intermittent small explosions were rather alarming, I wasn’t always sure if it was feedback or anti-aircraft fire. I didn’t really feel the wartime atmosphere, the language, hairstyles and some of the costumes just seemed too modern-day, and I couldn’t help wondering why so many able-bodied young men should be around in London in 1943. Shouldn’t they have been in the army?

There were definitely a few problems with this production, but it has some impressive songs and some wonderful singers. This was a very enjoyable production that brings to the fore a very important story that really should be better known.

‘The Truth Stops Here’ premieres at Esher Theatre. Everybody loves a good story, especially one that’s true! With its captivating plot and unforgettable songs, this is a show not to be missed.

Written and produced by Surrey composer, Anthony Merryweather, ‘The Truth Stops Here’ follows one woman’s quest to expose the truth about a civilian disaster at Bethnal Green Underground Station during World War 2. The musical runs from 6-8 January 2022 at the recently opened Esher Theatre.

The creative team behind the Musical also includes Surrey writers Nick Paterson and Emma Woodhouse. The show was piloted earlier this summer and follows the colourful lives of those living through the Blitz in London’s East End. Nick Paterson said, “For our professional cast, it’s an opportunity to develop new characters and bring both wartime tragedy and humour to the stage in a unique way”.

Composer Anthony says of the Musical, “very few people know about this true story and for the relatives of victims it was almost a double tragedy – losing their loved ones and then having the truth covered up for so long. But we believe this musical offers a fitting memory to them”.

A striking memorial to the victims stands proudly outside Bethnal Green Underground station. ‘The Truth Stops Here’ production team is raising funds to support the future upkeep and maintenance of the Memorial and gardens.

Director Sophie Flack describes why she was drawn to this new musical. “The spirit of East End people comes across with real energy in this story. There is laughter and tears, despair and celebration, and above all impossible-to-forget songs”
https://www.thetruthstopshere.com/

“The times they are a-changin'”, as Bob Dylan put it - and as a deceased woman’s grandson (Phillip Jones) returns home to attend the funeral, the … END_OF_DOCUMENT_TOKEN_TO_BE_REPLACED

It’s not often that the entertainment tastes of an intellectually snobby middle-aged woman and an action-mad 10-year-old boy align perfectly, but … END_OF_DOCUMENT_TOKEN_TO_BE_REPLACED

Notre Dame is the latest digital production by Threedumb Theatre, live-streamed from The Space in Canary Wharf, London and directed by Stephen Smith, … END_OF_DOCUMENT_TOKEN_TO_BE_REPLACED

Icarus has fallen, and Minos has her dead to rights in an open-shut court case, but perhaps another story might be found. An interesting premise, an … END_OF_DOCUMENT_TOKEN_TO_BE_REPLACED

The latest production at the intimate Finborough Theatre boasts a visually striking set designed by Sarah Beaton on a traverse stage, with the … END_OF_DOCUMENT_TOKEN_TO_BE_REPLACED