Celebrating half a century since Eric Carle’s The Very Hungry Caterpillar was first published, Rockefeller Productions brings its eponymous puppet theatre display on tour to the UK with residency at the new and highly family-friendly Troubadour White City Theatre until 1st September, before the show tours to Nottingham and Leeds in the autumn. This production is not a play of The Very Hungry Caterpillar but is instead a visually-stunning tribute to the greatest hits of Eric Carle; featuring lovely staging of the author/illustrator’s other classics including Brown Bear, Brown Bear, 10 Little Rubber Ducks and The Very Lonely Firefly before it climaxes to narrate the titular story. 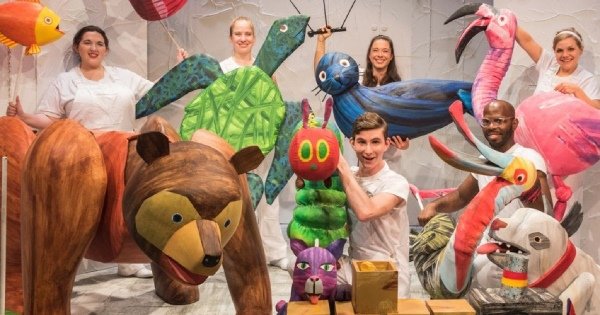 With wonderfully rendered puppets (that would rival some of the creatures featured in this year’s Olivier-award-winning The Wider Earth), this show demonstrates the highest levels of technical proficiency. The set appears to be a simple, white backdrop but it is cleverly textured, contoured and designed with hidden and delightful windows from which characters can emerge to offer the same joy as opening an Advent calendar. Painting with light as beautifully and gracefully as Carle’s acclaimed illustrations, creator Jonathan Rockefeller and his creative team take full advantage of the state-of-the art theatrical equipment at the Troubadour to create a gorgeously mesmerising tableau. The overall effect is captivating and soothing for children but do bear in mind that this production, like Carle’s writing, is squarely aimed at the pre-school to Reception crowd. There is no plot nor musical numbers to provide ‘razzle-dazzle’ to older children but the Troubadour does offer a sense of theatrical formality with its proscenium stage set-up and deeply darkened house by way of socialising youngsters to some of the conventions of live theatre.

The excellent sound, lighting and set design along with the graceful movements of the performers are almost lyrical and hypnotic in their beauty and would also be entrancing for parents were it not for a most unfortunate and misguided creative/promotional decision from Rockefeller Productions that is likely to repel seasoned or serious theatre-goers who are hoping to find an entre to the experience for their toddlers.

Rockefeller Productions are experts in harnessing the live staged power of beloved and famed brands from Elmer the Elephant to the Golden Girls. As both licensors of storied intellectual property and theatrical producers they will never be able to escape the relentless pressures of competing for audiences and awareness. Naturally promoting their performances by social media is part of the game these days. However, the experience of The Very Hungry Caterpillar Show is significantly diminished by the producers allowing (and seemingly encouraging) their audience to photograph, and even video, the production as it transpires. This is not something universally permitted at the Troubadour so do beware that should you pull out a phone in another performance at the same theatre you might find yourself rebuked – and with good reason, given the very darkened seating area and strict fourth-wall staging offered. (This is not a naturally-lit gig at the local public library but a highly theatrical and professionally acted presentation on a raised stage to a vast auditorium.) So poor is the resultant impact of allowing photography that The Very Lonely Firefly might as well be re-named ‘The Very Light-Polluted Arena’, as all eyes move from the stage to tiny, wobbling screens that block everyone’s view, save the front row. If I had worked as masterfully as the lighting team to create the stunning water-colour effects of this production only to have the imagery contaminated with hundreds of iPhones reflecting and distracting in order to record amateur facsimiles of these decisive and expert creative efforts, I’d be heartbroken. Furthermore, this production could be a wonderful training ground for familiarising young people with theatre etiquette but instead trades its sterling production values for all the ambience of a school pageant in the gym/canteen as it desperately chases Facebook shares. Surely Rockefeller et al would be better off following the lead of the marketing teams at shows such as Waitress by providing props and backdrops in the foyer to get punter endorsement before and after the show or take a tip from that Olivier-Award-Winning team behind The Wider Earth and invite families to meet the puppets outside of the the theatre?

This production is almost balletic in its elegance and visual appeal and will entrance pre-schoolers, whether fans of Carle’s books or not. The facilities at the Troubadour are ideal for young families, with plentiful loos, picnic areas and ample space for buggy parking – what it may lack in West End history or soul it more than makes up for with practical resources. The show is strong enough to imprint itself on both your and your children’s memories for some time without any recourse to digital reproduction. Relax and let yourself be swept away by it!

The Very Hungry Caterpillar Show features a menagerie of 75 enchanting puppets during a magical show that faithfully adapts four of Eric Carle’s best loved books for the stage. The 50th Anniversary production will feature a brand-new line-up of stories for 2019; Brown Bear, Brown Bear, 10 Little Rubber Ducks, the return of The Very Lonely Firefly and, of course, The Very Hungry Caterpillar.

The Very Hungry Caterpillar, has nibbled its way into the hearts of millions of children all over the world, and in 2019 celebrates its 50th Anniversary. Since it was first published in 1969 it has been translated into 62 languages and sold over 50 million copies worldwide, remaining one of the bestselling children’s books of all time.