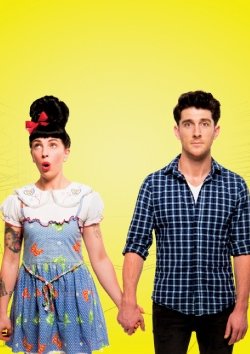 Had it not been for the press release, I wouldn’t have been any the wiser: the narrative in The Worst Little Warehouse in London is ‘based on a true story’. Based? It’s so convincing that it might as well have been a verbatim piece of theatre. On second thoughts, that might be more than a little creepy, as there were no recorded interviews or invited comments from the characters portrayed, and if what the comedy acts at the Edinburgh Fringe say about not giving real names when recounting certain stories for legal reasons is true (and it probably is), ‘based on a true story’ should get this production out of any potential lawsuits. I’m going one step further, and not including any off-stage character names: better safe than sorry.

It’s all remarkably realistic, if zany. Lala Barlow and Robbie Smith, who hail from Australia (I don’t think they ever got any more specific than that) had both newly arrived in London, and although so many place names are referenced, the show works well whatever someone’s level of knowledge of the capital is. Assume, for instance, an audience member has never been to London – neither had Lala and Robbie. So, there’s much to learn about things like etiquette on the London Underground, and a need to get over the Piccadilly line automated announcement about the train terminating at Cockfosters. (Incidentally, the one on the Northern line, where trains terminate at Morden, is sometimes misinterpreted by visitors to London as ‘Mordor’, one of the locations in JRR Tolkien’s ‘The Lord of the Rings’ series.)

Because of the ongoing property crisis, what passes for affordable housing for our duo is a former warehouse in Manor House. The housemates that come and go are representative of the cosmopolitan nature of the capital, and each have their unique eccentricities (goodness me, this pair are observant). A line about someone who moved to this north London location having ‘escaped’ Croydon went down particularly well with fellow Londoners in the audience at the performance I attended, while there is much to both laugh and shudder at with regards to shared accommodation.

Take, for instance, the state of a shared toilet. There are those who use a toilet brush, and then there are those who don’t. And there are ways of pointing out someone isn’t pulling their weight when it comes to personal hygiene and general housekeeping – the Australian way is more direct, Smith points out, giving an example, but the British way is more entertaining. It is not, in the end, the warehouse itself that makes it so bad to be dubbed the worst in London, but its inhabitants. One housemate, a teacher, doesn’t like her job but rather than find a new vocation, she sticks it out, even though she has now reached the point of describing her working day as “babysitting the broken condoms of London”.

There are some very good musical numbers in the show, with seamless transitions between the two as one plays a keyboard situated upstage whilst the other acts out a character. Only rarely is the accompanying music pre-recorded. Much of the music is familiar to those with an interest in musical theatre, with sources as diverse as Fiddler on the Roof to Legally Blonde The Musical. Look out for a hilarious on-stage costume change – I’d be surprised if anyone misses it. A fellow theatregoer had it right when he told me he was exhausted just watching it. A genuinely amusing and joyous production.

When 12 people live in a converted warehouse in north London, what could possibly go wrong? In this hilarious and off-the-wall cabaret, Lala Barlow and Robbie Smith are two wide-eyed koalas fresh off the boat and looking for the perfect place to call home. Relive their year living at Daisy Mill as they discover high ceilings, bathroom baskets and very thin bedroom walls. Directed by Sarah Redmond and starring every housemate you’ve ever lived with, it’s a celebration of the joys of shared housing.

Based on a true story, the cabaret’s inspiration came about when the real-life couple were living in a converted warehouse in North London. Struggling with exorbitant rents and the city’s ongoing housing crisis, the pair lived with 10 housemates for over a year, discovering so many tales that were too good not to share. Co-writer and co-performer Robbie Smith says: “Almost every day something would happen in the warehouse and you would think ‘you just can’t come up with this stuff’ and eventually we decided that we had to get these characters on stage.”