If the dialogue wasn’t quite so eclectic and engaging, I might have decided to attempt to have kept a tally of how many times a trestle table is folded and unfolded during the show. I suppose the play is called Trestle for a reason, and it is, fortunately, or unfortunately, necessary for the set up of each of the show’s twenty-one scenes (yes, there’s an interval, at least in this version). Over a number of months, Harry (Timothy Harker) meets Denise (Jilly Bond) – they share use of the village hall in Billingham, North Yorkshire. He is chair of the ‘improvements committee’ (there are such committees in various towns and villages to this day), which appears to be a charitable organisation that uses money raised in the village to make physical improvements to it. The committee meets each week, in a late afternoon/early evening timeslot adjacent to Denise’s Zumba class. 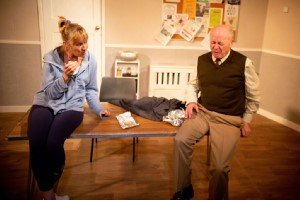 Hence the table and chairs being put away repeatedly: each scene represents another week, in which Harry is finishing off his paperwork, about to leave, and Denise has just arrived. The contrast is evident – though when the pair agree to attend each other’s sessions, the committee turns out to be a full and frank exchange of various views and opinions, while the Zumba class, although as vibrant and energetic as one would expect it to be, comprises an altogether more agreeable group. Harry’s attendance at Zumba had him change from his usual suit and tie into a T-shirt and some fluorescent shorts and brought to mind Malvolio’s yellow stockings in Shakespeare’s Twelfth Night.

A certain level of initial awkwardness, commensurate with people meeting for the first time, never quite dissipates fully – if anything it increases as the duo get to know each other with each passing scene. The tension is often palpable: there are some weeks when Harry is rather keen to get away without speaking to Denise at all, and on occasions he times himself well enough to do just that.

Despite some initial reluctance, Harry agrees to attend a party with Denise and her friends, and while the evening passes uneventfully (given that it’s a party on a weekend night), the audience is only partial to what the pair discuss in the village hall during their encounters.

This is far from the typical two-hander one-location play, in which so much ground is covered in the show such that one comes out of the theatre having experienced an assault on the senses. It is, in a word, pleasant – with some delicate and laugh out loud moments. How refreshing, too, that the audience isn’t subjected to yet another discourse from older characters on the shortness of life or the struggle to find a sense of purpose and meaning in retirements. That said, it’s not all flowery, but while there are moments of aggression and frustration, these serve to make the narrative all the more credible.

The conclusion is, well, inconclusive: it’s not entirely clear what happens to the pair once a change of circumstances eventually brings their rounds of weekly greetings and salutations to an end. Both characters display a level of reticence and reluctance that is inherently British. A bittersweet but believable production.

We’re not here forever. You’ve got to take a chance from time to time. Sometimes you’ve got to see something you like and grab hold. Don’t let it go.

Harry feels like life is beginning to tick down, his autumn years spent quietly caring for the community he loves. Denise thinks life begins in retirement and she’s dancing like she’s still at high school. When their paths cross at the village hall, their understanding of the time they have left changes irrevocably. What do community, growing old, and falling in love really mean? And who gets to decide anyway?

Trestle is a warm hearted, funny and moving look at two retired people brought together each week as they fold away a trestle table in their community hall. A bittersweet comic drama about later life, love and community. And bananas.

One of London’s finest secret venues, the Crazy Coqs Cabaret & Bar at the stunning Brasserie Zedel is the perfect venue for the opening night of … END_OF_DOCUMENT_TOKEN_TO_BE_REPLACED

Stacey Solo (Tamar Broadbent) may well be an all-American criminal investigator, though the sense of irony and sarcasm is often inherently British. … END_OF_DOCUMENT_TOKEN_TO_BE_REPLACED

Just reading Janie Dee’s entry in Wikipedia is exhausting! This multi-talented artiste has achieved so much and her return to Cabaret at The … END_OF_DOCUMENT_TOKEN_TO_BE_REPLACED

From the moment we cross into the circle of caravans leading up to the big top we are transported into a different world. A lighter world of frolic, … END_OF_DOCUMENT_TOKEN_TO_BE_REPLACED

Postponed, as many productions were, due to public health restrictions, Stigma is a deeply personal story spanning much of Luis Amália’s life (or at … END_OF_DOCUMENT_TOKEN_TO_BE_REPLACED