Home » Reviews » Trumpageddon: The future isn’t bright, though the future is orange 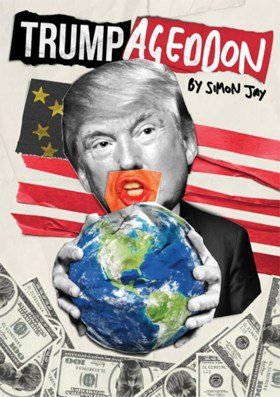 Satire, as well as irony, died when Henry Kissinger won the Nobel Peace Prize back in 1973. More than forty years on the cutting art of puncturing the pomposity and pretentions of our political leaders survives. But perhaps not with the edge of the golden age of satire in the 1960s. The targets of “Beyond the Fringe”, “Private Eye”, and “That Was The Week That Was” and, in America, “Rowan & Martin’s Laugh-In” were the slightly ridiculous political figures of those times. But in 2016 we have landed in a “post ridiculous” age where we not only have posturing fools in politics, but now we elect them to high office.

Simon Jay’s Trumpageddon arrived at the King’s Head fresh from it being a big hit at the Edinburgh Festival. It is a one-man show in which Jay holds a mirror up to the ineffable Donald Trump and only slightly exaggerates his dysfunctional character. His impersonation is pitch perfect. I was reminded a lot of Barry Humphries whose characters like Edna Everage and Les Patterson are just on the right side of believability. They are of course fictional, whereas Trump is all too real. Jay’s tour de force was perhaps intended in part to be a warning to us all of the dangers of this perilous sociopath. Whether Jay actually thought that Trump could win the Presidency I’m not sure. Few of us really did. Even after the political earthquake of Brexit it seemed improbable that the Americans would take a step that would be even more extraordinary than the choice we in Britain made in June. But, as we now know, that is exactly what they have done.

Good satire illuminates the truth by slightly distorting and exaggerating it. During the performance, Jay frequently uses the expression “I’ve said that so I know” to confirm that many of the weird, offensive, statements he puts into Trump’s mouth is actually real. Trump is doomed by his own words. The performance on 8th November was on the actual night of the Election and, as a consequence, was I think more improvised than previously to take account of the tensions of the moment. The funniest part for me was when an audience member, invited to ask questions, asked about the size of Trump’s “manhood”. In response, Jay takes the questioner behind a screen to answer the question. It was hilarious.

The comparison with Barry Humphries extended also to the way Jay used his face to express an opinion. One withering glance with the mouth at an angle drew as many laughs as the script (if there was one). He also managed to look as orange as Trump and to caricature him scarily accurately. The interplay with the audience was skilful and in character he got away with insults and invective that seemed wholly authentic. Trump is an egomaniac grotesque and, as I say, he satirises himself all the time. Simon Jay provides a stage for the real Trump to emerge and very funny it is, except, of course, that it isn’t if the absurd fictional character of “Donald Trump” becomes the reality of “President Trump” – which it soon will.

The final moment of the show has Trump wrestling with the reality of actually being President and this takes him into a foetal position on the floor, his head in his hands, and wailing. In a few months’ time, perhaps the ghastly reality will hit us all, including Trump of course. His ego will carry him though no doubt, but to where and with what consequences none of us knows. Trumpageddon warned us, but then so did Trump. The future isn’t bright, though the future is orange.

580,963 people signed a petition to ban Donald J. Trump from entering the UK. Yet he’s here in London in all his horrifying glory. Immerse yourself in Trump’s vision of the world before he blows it to kingdom come. Witness the way he works an audience up into a fervour, ask him all the burning questions and see what a world would be like if The Donald was president. From five-star writer and performer Simon Jay, this absurdist satire of the next US President is as demented, hysterical and disturbed as the man himself.

Titus Andronicus is not usually a comedy, it is usually a bloody, villainous and vengeful tale, but tonight it is a comedy and a rather amusing one at … END_OF_DOCUMENT_TOKEN_TO_BE_REPLACED

This show is not without clichés - there are three of note in this production. Firstly, the French horn of the show’s title is personified, speaking … END_OF_DOCUMENT_TOKEN_TO_BE_REPLACED

There’s very little in the way of set in this show: aside from chairs, a few crash barriers and at one point, a red carpet, the actors’ movements … END_OF_DOCUMENT_TOKEN_TO_BE_REPLACED

South African born, but raised on the Isle of Man, Pierre Novellie is a true raconteur rather than just another 'stand-up' comedian. He says about his … END_OF_DOCUMENT_TOKEN_TO_BE_REPLACED

This show, Willy Hudson began by saying, is about himself. It is written by himself, is directed by himself and executive produced by himself. Almost … END_OF_DOCUMENT_TOKEN_TO_BE_REPLACED