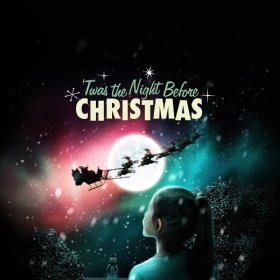 Even getting to ‘Twas The Night Before Christmas was a bit of an adventure in itself, beyond the usual (now tired) joke about Hornchurch being a few stops beyond Barking. The ‘young audiences’ whom this production was aimed at seemed to take the entry and exit to and from the performance space in their stride more than the parents and grandparents did, being escorted through a side door and past miscellaneous dressing rooms to what has become a flexible studio space. Here, the children are asked to sit on the carpeted (well, rugged) floor, with blankets galore, most of which fell out of use as the show progressed, because the studio was at room temperature.

Mind you, our narrator, or Storyteller (Samuel Ward-Smith), to use the title ascribed to him in the show’s programme, does a good job of putting across the idea of it being rather cold, with talk of reindeer, ‘St Nick’ and the North Pole. Sam, as he likes to go by, has his reasons for thinking that making paper chains will help keep him in St Nick’s ‘nice’ list, as opposed to the ‘not so nice’ list, and even elicits the help of younger members of the audience. There’s no talk here about lumps of coal or any sort of bogeyman, and all is kept friendly, if more than a little frantic, as Sam’s excitement for the big day is pleasantly palpable – and relentless.

It was interesting, being sat amongst the adults on the sort of stackable chairs found in function rooms, to note the sort of thing that gets the children engaged and roaring with laughter. When Sam attempts to find a hiding place so as not to be seen by St Nick on Christmas night, one of several unfeasible options is a bedside drawer. It doesn’t work, because the drawer is designed to hold the owner’s possessions, not the owner himself. Or, as Sam puts it, St Nick will see his bum sticking out. Cue laughter.

Sam also responds remarkably well to the children’s remarks – technically, it’s heckling, but none of the children call out with malicious intent, and to be fair, contributions are invited and welcomed. This isn’t a primary school, there’s no teacher insisting on pupils putting their hands up, and the children respond accordingly. I had to try to contain my laughter at one point: Sam, having received confirmation (I won’t reveal how) that St Nick will indeed pay him a Christmas visit, begins bouncing around his bedroom, almost yelling, “He’s coming! He’s coming!” with the fervour of someone describing events (ahem) at an adult panto. The children lapped it up, however, and it wasn’t for me to spoil things by chuckling at something many of them evidently took quite seriously.

A brief but bright and breezy production, it doesn’t quite end with the eponymous line, “Happy Christmas to all, and to all a good night!” as there’s an opportunity for a bit of post-show playtime for the children in the audience. One would have to have a heart of stone not to be encouraged by this delightful cracker of a show.

It’s Christmas time. Leave your shoes and slippers by the fireplace and settle down to hear one child’s story about the night they met a certain twinkly-eyed, round-bellied chap.

Originally written for his two daughters in 1823, Clement Clarke Moore’s much-loved ’Twas the Night Before Christmas is still read to millions of children around the world today. This beautifully delicate adaptation, devised and directed by Artistic Director Douglas Rintoul will get everyone, young and old, peering a little further into the sky this Christmas Eve.