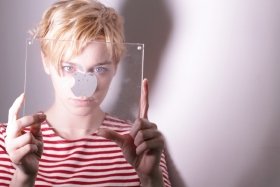 ‘I love this job, it’s easy money…but where is the line?’
This multimedia play, written by Thomasin Lockwood and produced by A Friend Called TJ, cleverly explores the boundaries pushed when lives are vulnerably opened up to the world of social media.

Incredibly current, this play not only touches on the reality of becoming a YouTube star but on the reality of mental health, in particular – depression. Lockwood’s character, Megan, starts out wanting to help others by being honest about her depression on her channel, but it soon becomes too much when she struggles to find the line between helpful and distasteful.

The play opens with a pre-recorded ‘vlog post,’ which then continues as live action on stage. These pre-recorded videos are interspersed throughout the rest of the play, and it is a credit to the actors that the live action blends seamlessly into the recorded sections. Lockwood’s relationship with Johnny Neal, who plays her other half, Scott, is both intense and playful, with the different avenues and pressures of being a famous online couple explored realistically.

The play highlights a lot of areas that are probably often overlooked by the audiences of today’s YouTube stars; the pressure to record and upload regularly, and the pressure to be ‘real’ yet without revealing too much. Indeed, it is all too true in today’s world that although mental health is talked about more, it is also glamorized, and when things get too ‘real,’ people aren’t always prepared to listen.

Lockwood has a lovely stage presence throughout, she is watchable and reaches the raw emotions without too much drama, it is all completely natural. Neal portrays the cheeky, popular boy character very well, but shows his vulnerable side when it all gets too intense too. Within the problems of their vlogging careers, there are also problems in their relationship, which are truthfully explored, covering both the difficult and the tender moments.

As well as the pre-recorded videos, there are some clever montage type scenes, with one, in particular, showing a great passage of time and covering not only the main characters but the likely stereotypes who would be commenting on the channels. The choreography for this montage is by Lindsey Scott and includes both physical theatre and contemporary dance elements. The set – five small ottomans in YouTube colours – are used cleverly throughout both the montage and the show, seamlessly moved around to reveal different places and times together with the clever lighting by Amy Daniels.

Overall, this play is hard-hitting but charming, with an endearing energy and very current values explored. Definitely worth a watch and if performed in the future it would be interesting to see how it develops alongside social media trends.

Note: Talking to Lockwood after the performance, she reveals that she did a lot of research while writing, discovering that many YouTube stars are themselves depressed, whether that is revealed through their vlogs or not.

Scott is desperate for a full-time career as a YouTube gamer. Meanwhile, Megan finds a niche in a new channel vlogging the daily ups and downs of her mental health.

As their name rises and the pressure mounts, the couple find themselves sacrificing everything they have; their privacy, their relationship and eventually, their sanity.