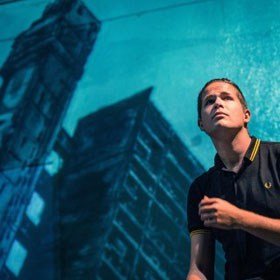 What I learned from Johnny Bevan is an astonishing, thought-provoking and original tour-de-force by the young poet and performer Luke Wright. It won for him the “Fringe First Award for new writing” and “The Stage Award for acting excellence” at the Edinburgh Festival last year. The work starts with five minutes of rhyming couplets which then give way to a more measured if no less impactful poetic style – in total an hour of uninterrupted, fluent story-telling which captured completely the audience in the compact Soho Theatre.

Nick is a thirty-something successful writer who grew up in a comfortable middle-class family in Colchester and got a place at University to study law (like his father). Wright slips easily into the quite posh accent of Nick’s Dad and conveys well the establishment and conformist environment at his home. Then at Uni in the late-1990s things begin to change when he goes to an “Open Mike” event at a pub and hears a brilliant stand-up routine by fellow student Johnny Bevan. Bevan has political positions and language alien to the 18 year-old from Colchester. For Johnny there are only two ways of describing things – either “shit” or “proper” – and there is no doubt that the Tories are the former! Then the 1997 election happens and Johnny and Nick cheer together as Conservative seat after seat falls to Labour culminating in the great Portillo moment. So Nick become radicalised switches courses from Law to English Literature and he and Johnny and their friends become self-assured radicals welcoming the new golden age of socialism. Except, of course, that it wasn’t.

There is a clever metaphor for the disillusionment that set in gradually over the Blair years. Johnny’s mother lived in ghastly London high rise council housing called the “Groom Estate”. It stank. The lifts never worked.

There was violence and danger. Today (2015) that estate has been refurbished not as improved social housing but as a venue for a music and cultural festival, “Urbania”, where the well-heeled attendees will pay £1,400 a night to sleep in luxury. Nick goes on a media junket to the opening of this and surrounded by posh and glossy girls called Tilly and Milly we are in that familiar modern world of instant gratification and show not substance.

But what has happened to Johnny over these years? Nick has lost touch but then a Facebook page appears and he makes contact again. Johnny’s disillusionment with the “New Labour” years is summed up in a brilliant phrase he throws at Nick: “They dropped my [working class] Mum to get your [middle class] Dad”. And so, of course, they did! Johnny even defends UKIP as relating better to his background that Labour now does!

There is lost youth – lost in Johnny’s case as, living in a squat, he slips into a dark, bleak and dysfunctional world and lost in Nick’s as he successfully pursues a professional career. They are not what they were and have nothing in common any more. Do you meet your “friends for life” at University – not if they later pursue quite different lifestyles and careers (or lack of them) you don’t. Luke Wright has written a clever, novel and important work for theatre which he presents fluently and powerfully with lots of eye contact with his audience and strong acting. His timing is excellent – both on stage and in the fact that his work is depressingly relevant to our times today.

What I Learned from Johnny Bevan by Luke Wright
Searingly relevant political drama from leading Radio 4 poet Wright. His first theatre show is a multi award winning, up to the minute relevant drama. Wright delivers an impassioned, spellbinding performance of his own razor sharp script that is infused with humour, humanity and wit to tell the tale of a jaded journalist who unexpectedly encounters his past at the launch of a new London music festival, and goes in search of the catalyst of his university days political awakening.

It wasn’t that long ago when anyone who gave warnings about Sleeping Beauty would be dismissed as more than a little ridiculous. The concern is that … END_OF_DOCUMENT_TOKEN_TO_BE_REPLACED

Alby hates themself, but can't work out why, and that irks them, even if they don't quite realise it. In this witty, occasionally unsubtle, but … END_OF_DOCUMENT_TOKEN_TO_BE_REPLACED

I have seen some outstanding acting recently at the intimate Finborough Theatre, and this new play is no exception. The highly talented cast quickly … END_OF_DOCUMENT_TOKEN_TO_BE_REPLACED

In the pandemic (remember that?) I worked in adult social care. My role was to help older people in their own homes with daily tasks - I’d cook meals, … END_OF_DOCUMENT_TOKEN_TO_BE_REPLACED