Home » Reviews » What Shall We Do With the Cello? – Review Vault Festival 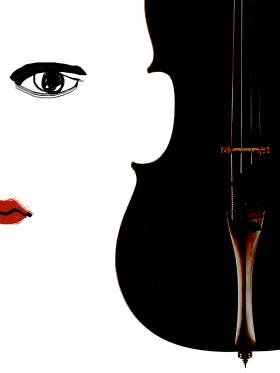 The Vault Festival is renowned for the diversity of its productions. Over the course of the festival, there will be a show or two that are pure ‘marmite’, loved by some and disliked by others. An example of this can be found in Atelier Theatre Studio’s UK premiere of Matei Visniec’s What Shall We Do With the Cello?.

The action is set in a waiting room where there are four chairs, a cello and a bow. Suddenly, in rushes, a man (Nick Allen) obviously getting away from the storm outside. He picks up the cello and starts to play. The music is very contemporary, with hard, discordant notes that jar the ears rather than a flowing melody. Soon after the man starts to play, the Lady with the Veil (Simona Armstrong) enters. She is young and pretty but and has a rather prim and proper appearance. The two of them are not alone for long and are soon joined by The Man with the Stick (Mihai Arsene) and finally The Man with the Newspaper (Tudor Smoleanu). Four strangers united by their need to be out of the storm. As you would expect, the occupants of the waiting room start to converse, or at least three of them do. For all the time, the man with the cello continues to play. The other three discuss the cello player and his motivation in playing. However, as the playing continues, it starts to irritate the other three, who politely ask the man to stop. Without replying, he ignores them and continues to apply bow to cello, almost taunting the others. The tension builds as the music continues to tumble out of the instrument until finally the others can take it no more, and decide to resolve the situation in their own unique and dramatic manner.

What Shall We Do With the Cello? is described as a surreal comedy. Unfortunately, it really didn’t work for me. This was a shame because it was obvious that the production company had put a lot of effort in staging the show. For me, there were problems with the writing. There was no sense of time or place and from the start, there were many questions raised that were never answered. Where were we? When were we? Why was there a cello and bow sitting in a waiting room and for that matter, what was everyone waiting for? My real problem was that at the end, I was left feeling that I had missed something or just wasn’t bright enough to understand the author’s intentions. Not a great way to leave a theatre. My other issue was the choice of music. I have a fairly eclectic taste in music but I have to say the music by one of the world’s leading avant-garde composers, Iancu Dumitrescu, just didn’t sit well on my ears.

Having said this, the performances were first rate and I have to give praise to all four actors for the way they brought their characters to life. Special mention has to be given to cellist Nick Allen who played the music superbly throughout and, although never speaking, managed to convey his feelings as things escalated extremely well. Director Vasile Nedelcu keeps the show flowing nicely and makes full use both of the performing space and his cast’s abilities, including the very sweet singing voice of Simona Armstrong.

So to sum up, What Shall We Do With the Cello? really wasn’t my sort of production. However, I could have been in a minority as the reaction from the rest of the audience was very warm and appreciative. Whilst I wasn’t that keen, it was good to go outside my comfort zone and see something different and let’s face it, two days later, I am still thinking about the show which is not something that happens with every production I see. What Shall We Do With the Cello? proves why festivals such as the Vault Festival are so amazing and should be supported by everyone with an interest in the arts.

A storm, a waiting room: the man with the newspaper, the woman with the veil, the old man with the stick. In a corner, the man with the cello is playing his instrument, ceaselessly. At first, they listen to him, but very quickly the obsessing tune drives them mad. They try, taking turns, to convince him to stop…. But the man with the cello doesn’t want to, he doesn’t reply to them. He is playing, more and more menacing, alone against everybody… The others will have to organise themselves against this unexpected musical aggression… Matei Vișniec.

“A wonderful production with powerful, inciting theatrical images that [Nedelcu] has brought about through fantasy, humour, and an original and coherent style” – National Courier / Curierul Național on Nedelcu’s ‘98 production of What Shall We Do With The Cello?

This production is made possible with support from The Romanian Cultural Institute.

I wouldn’t exactly say Ben Forster appearing as himself in this musical comedy is a career highlight (he is, after all, someone who has played the … END_OF_DOCUMENT_TOKEN_TO_BE_REPLACED

It’s an intricate plot, laced with some subversive humour - that the female character is simply called ‘The Woman’ (Molly Lynch), for instance, is … END_OF_DOCUMENT_TOKEN_TO_BE_REPLACED

Andrea McArdle didn’t, when the 1978 movie Rainbow was released, look or sound like Judy Garland, and she still doesn’t. You’d be forgiven for … END_OF_DOCUMENT_TOKEN_TO_BE_REPLACED

TENNIS ELBOW is the first play that John Byrne has written for thirteen years, and is in fact a companion piece to his critically successful Writer’s … END_OF_DOCUMENT_TOKEN_TO_BE_REPLACED

It’s all a bit banal, really - or perhaps I’m too heavily influenced by some of the other online productions that I’ve seen recently, which deal with … END_OF_DOCUMENT_TOKEN_TO_BE_REPLACED