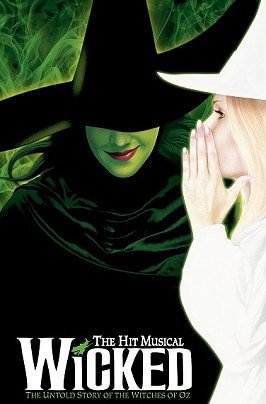 Wicked goes back to when the two witches first meet at school. Glinda is immediately popular and well-liked, easily accepted by the other students. However, while Glinda is welcomed Elphaba is laughed at and tormented constantly because of her distinctive green skin. The two witches are opposite in appearance and personality. In spite of this over time their initial resentment of one another develops into an unlikely friendship, with the two witches learning from each other and developing a close bond.

Both Savannah Stevenson (Glinda) and Natalie Andreou (Elphaba) are strong performers. They are ably supported by a skilled cast who take their audience on a journey into the history of Oz which also explains the origins of many aspects of the original story. We learn about various aspects of the original Wizard of Oz such as the Cowardly Lion, the Tin Man and the Scarecrow. The iconic ruby slippers also appear, and their presence has long term implications for both witches, as well as Elphaba’s sister Nessarose (Katie Rowley Jones).

The set is stunning and also versatile, with the large dragon flying overhead and moving parts that help to create the world of the witches, together with music from a live orchestra, led by Musical Director James Draisey. The production manages to be both entertaining and emotional, with a script that is extremely clever and well-written and frequently provides brilliantly funny moments. In spite of her initial isolation, Elphaba proves to be more powerful and skilled with magic than her fellow students. However after she and Glinda meet the elusive and somewhat eccentric Wizard of Oz, the lives of the two witches take very different paths that will have consequences not only for Glinda and Elphaba but also everyone in the city of Oz. It shows how two friends, who have more in common than they realise at first, can go on to very different futures.

One of my favourite aspects of Wicked is the way it looks at how people can be badly treated by others, simply because they look different from those around them. It has a powerful anti-bullying message: just because someone looks or seems different doesn’t mean there’s anything wrong or ‘bad’ about them. Wicked also works with the Ben Cohen StandUp Foundation, which works to combat and raise awareness of bullying and the damage it causes. As the relationship between Elphaba and Glinda shows, being different doesn’t mean you can’t be friends.

Not only does Wicked manage to entertain on a large scale, with striking lighting and a detailed set, but it is also a production that combines dramatic and equally powerful emotional moments between the characters. Overall I found Wicked to be a very enjoyable production. This was my first visit in some time to a major West End show and it definitely won’t be the last.

A wickedly funny and clever story about the ‘other’ story of Oz.

WICKED, the award-winning West End musical that tells the untold story of the Witches of Oz, announces the launch of its new booking period, with tickets going on sale into its 9th year at the Apollo Victoria Theatre, London.

Winner of 90 international awards, Wicked has cast its magical spell over audiences of all ages across the world for a decade and continues to be a record-breaking hit at London’s Apollo Victoria Theatre, where, as of 2013, it has become the 16th longest-running West End musical of all time.

It wasn’t that long ago when anyone who gave warnings about Sleeping Beauty would be dismissed as more than a little ridiculous. The concern is that … END_OF_DOCUMENT_TOKEN_TO_BE_REPLACED

Alby hates themself, but can't work out why, and that irks them, even if they don't quite realise it. In this witty, occasionally unsubtle, but … END_OF_DOCUMENT_TOKEN_TO_BE_REPLACED

I have seen some outstanding acting recently at the intimate Finborough Theatre, and this new play is no exception. The highly talented cast quickly … END_OF_DOCUMENT_TOKEN_TO_BE_REPLACED

In the pandemic (remember that?) I worked in adult social care. My role was to help older people in their own homes with daily tasks - I’d cook meals, … END_OF_DOCUMENT_TOKEN_TO_BE_REPLACED