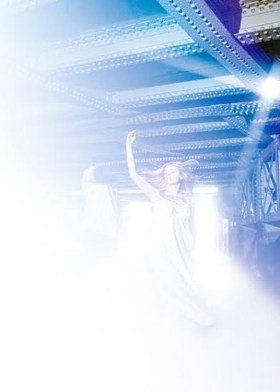 Wuthering Heights, adapted by Stephanie Street, is one of three productions in this year’s National Youth Theatre Rep Company. Following the intertwined lives of Cathy and Heathcliff, this play charts their meeting, their childhood, first romances, their inevitable separation and the destruction this leaves in its wake. Directed by Emily Lim, the play allows a range of actors tackle the different life stages of its eponymous characters, told in hindsight from Cathy’s grave. The setting is non-specific, the action interrupted by commentary from ‘the present’, and a poetic edge given to the romance through a sharp, discordant soundtrack, and philosophical interjections from faceless voices behind a screen.

The script let the play down in many ways. Sometimes over-flowery, nonsensical and waxing lyrical about time, stars and flowers, and at other times sweary and downright crass, this story was full of angst, drama and actions with little consequence, as it hurtles towards its predictable conclusion. Understandably, as a rep show, each actor wishes to make their mark, but with each scenario relentless in its emotional turmoil, the results were somewhat overwhelming. Regardless, certain actors navigated their way through this minefield of feeling; Gavi Singh Chera as Graveside Heathcliff was watchful, lurking underneath scenes as they unfolded, but never pulling focus; Alice Feetham gave housekeeper Ellen a lovely air of quiet confidence and stability; and despite her small role, Melissa Taylor provided light relief as pregnant, cake-loving Frances.

The set was very well conceived, and Lim’s directorial use of it was also admirable, being little more than a table, two chairs, and a mound of earth. Blurred faces from behind the plastic backdrop, lit with lanterns, contributed to the spooky atmosphere, and the scene changes were neatly interwoven within the story. A clever design, this show provides some opportunity for actors to showcase their talents, but sadly not quite enough to render this adaptation an unequivocal success.

When Heathcliff, a mysterious child is rescued and brought to Wuthering Heights, he develops an inseparable bond to Cathy. Their friendship soon develops into a passionate and iconic love, which spans generations and ends with tragic results. A beloved classic adapted for today’s audiences, not to be missed!

This entertaining new musical is very fortunate in having as its leading lady the terrific Katie Elin-Salt: she is onstage almost throughout, singing … END_OF_DOCUMENT_TOKEN_TO_BE_REPLACED

“Keep it shallow, keep it pretty, keep it moving,” declares Justin Vivian Bond, letting the audience determine for themselves what precisely is really … END_OF_DOCUMENT_TOKEN_TO_BE_REPLACED

This play didn’t do that well on Broadway the first time around in 1963, and did worse the second time around, even with a revised script, running in … END_OF_DOCUMENT_TOKEN_TO_BE_REPLACED

One of the very few good things about the COVID pandemic is that the opportunities to live stream theatre performances have increased exponentially, … END_OF_DOCUMENT_TOKEN_TO_BE_REPLACED