The Book of Mormon London Tickets 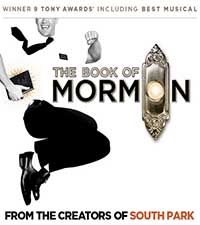 The Book of Mormon is the story of two young Mormon missionaries sent to a remote village in Uganda, where a brutal warlord is threatening the locals. Somewhat naive the two missionaries try to share the Book of Mormon, one of their scripture, which only one of them has read. They have problems communicating with the locals, who have more imminent concerns such as war, famine, poverty, and AIDS than about religion.

Review: “The Book Of Mormon does not hide what it is, in fact it shouts it from the billboards, and most people will have already made up their minds whether or not it is “their kind of thing”. But for those of you who may still be undecided let’s get one thing clear; if you are looking for elegant, witty, sophisticated comedy then this is most certainly not the show for you. Subtle it is not. However if you want an evening of larger than life razzmatazz which will keep you laughing and wincing in equal measure throughout, then you must see The Book Of Mormon. That is, if you can get a ticket.”

From 1st February 2016, the cast of The Book of Mormon at The Prince of Wales Theatre London, will be led by KJ Hippensteel as Elder Price and Brian Sears who continues in the role of Elder Cunningham. They will be joined by Asmeret Ghebremichael as Nabulungi, Stephen Ashfield as Elder McKinley, continuing in the role he originated for the West End production, with Delroy Atkinson, Richard Lloyd-King and Dean Maynard. The full cast will include Kelly Agbowu, Philip Catchpole, Christopher … END_OF_DOCUMENT_TOKEN_TO_BE_REPLACED

News today, that the US National Tour of the Tony-winning musical The Book of Mormon is inviting fans to take part in a scavenger hunt on August 16th. Those taking part will have the chance to win a pair of tickets for the award-winning production. The Book of Mormon will share clues on its Facebook, Twitter and Instragram accounts, "teasing the locations of hidden doorbells around Philadelphia". To play, follow The Book of Mormon on Twitter (@BookOfMormon), Instagram (TheBookOfMormon) or … END_OF_DOCUMENT_TOKEN_TO_BE_REPLACED

There are usually one or two shows which emerge as the big winners at any awards event, and the 2014 Laurence Olivier Awards were no exception. At this year’s ceremony, which was held at the Royal Opera House (ROH) in London’s Covent Garden, gongs were awarded to such productions as Merrily We Roll Along (Best Musical Revival), Jeeves and Wooster in Perfect Nonsense (Best New Comedy) and Les Miserables (Audience Award), as well as such talented individuals as Zrinka Cvitesic for Once (Best … END_OF_DOCUMENT_TOKEN_TO_BE_REPLACED