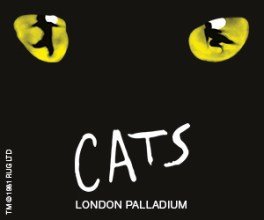 CATS is returning to the West End from 23rd October to 19th December 2015.

Andrew Lloyd Webber’s CATS at the London Palladium for a strictly limited season from 23 October 2015 to 2 January 2016, starring the Queen of British Soul Beverley Knight as Grizabella.

Following last year’s sell-out season in the West End, this new production of the “groundbreaking musical” (Daily Express) is absolutely “perfect for the festive season” (Daily Telegraph) and truly gives CATS a new life for a new generation.

Cats is set on the night that the Jellicle Cats meet for the Jellicle Ball and folds fantasy, drama and romance into the telling of its tale.

The cats have gathered from far and wide so that their father figure Old Deuteronomy can choose the one most deserving of making the journey up to the ‘Heavy Side Lair’. Each musical number is the story of a different cat, in many cases taken verbatim from Eliot.