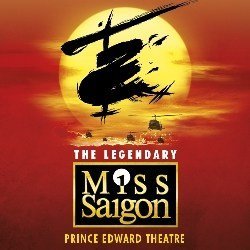 Have you bought your Miss Saigon tickets yet?
Set in 1975 during the final days of the American occupation of Saigon, Miss Saigon is an epic love story about the relationship between an American GI and a young Vietnamese woman. Orphaned by war, 17 year old Kim is forced to work as a bar girl in a seedy Saigon night club owned by a disreputable wheeler dealer known as ‘The Engineer’. John, an American GI, buys his friend Chris the services of Kim for the night. That night will alter their lives forever.

From its London premiere in 1989, Cameron Mackintosh’s production of Alain Boublil and Claude Michel Schönberg’s epic musical Miss Saigon has become one of the most successful successful musicals and one of the best ever to play the Theatre Royal Drury Lane.

As well as record breaking London and Broadway runs, Miss Saigon has been performed in 28 countries, in 300 cities in 15 different languages, and has collected over 40 awards including 2 Olivier Awards, 3 Tony Awards, and 4 Drama Desk Awards and been seen by over 35 million people around the world.

Claude Michel Schönberg and Alain Boublil recently wrote a compelling new song called ‘Maybe’ for the role of Ellen to sing in the second act which has been included in the recent Dutch and Japanese shows and will make its UK premiere in London.