School of Rock the Musical

Based on the iconic, hit movie, this irresistible new musical follows Dewey Finn, a failed, wannabe rock star who decides to earn an extra bit of cash by posing as a supply teacher at a prestigious prep school. There he turns a class of straight-A pupils into a guitar-shredding, bass-slapping mind-blowing rock band. But can he get them to the Battle of the Bands without their parents and the school’s headmistress finding out?

Stephen Leask recently took time out to chat with us about the show.

Q: Can you tell us about ‘your’ Dewey Finn in School of Rock?
Stephen: I like to think that I bring a lot of energy to the role. I’ve always been very physical and I’ve added in a few somersaults and handsprings here and there. Dewey lives in the moment and says exactly what he’s thinking. I’ve tried to emphasise that honesty in the character.

Q: What do you enjoy most about School of Rock?
Stephen: Working with the kids. They are so talented and it’s amazing to see how they develop as performers. It’s incredible to have been part of their journey from first rehearsals back in July to where they are now. Their confidence grows and grows. They take real ownership of the show and have such a mature and professional attitude. They are also very funny.

Q: Apart from Dewey Finn – who is your favourite character in School of Rock – and why?
Stephen: I really like the part of Summer. She starts out as this overconfident, slightly bossy, teacher’s pet, who isn’t sure about Mr. Schneebly (Dewey) coming in and messing up her lessons! Eventually, Summer and Dewey become friends and she’s the brains behind the whole operation! She is important to Dewey and has some very funny lines! 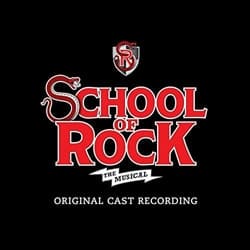 Q: What is your usual routine for a performance day?
Stephen: I usually get to the theatre at 5:30pm and do a vocal warm-up in my dressing room. It’s a big sing so I like to get started early. At 6:15pm I join in with the physical and vocal warm-up with the rest of the cast and the kids. It’s nice to get everyone together before the show.

After warm-up the band kids let me join them in having a 15-minute jam session. I say “let me” because they can play just about anything and I’m always trying to catch up! After that, I go to the green room and have a chat and then at “the half” I get in costume ready to start the show at 7:30!

Q: Do you have a favourite song in School of Rock?
Stephen: I love the song “Stick It To The Man”. It’s the song in the show where the kids finally let go and start rebelling against their parents and teachers. The song has some great lyrics and the meaning behind it is to stand up for yourself and not let “the man” push you around. The number also has great choreography and the audience always get behind it!

5-Star Review of School of Rock
At the end, we were all on our feet with a resounding standing ovation. It is one of the few productions on at the moment that I would happily go and see again. And again.
Review by Ruth Gledhill

5-Star Review of School of Rock
With plenty of eagerness and heart, this unapologetically positive musical is well worth seeing – and hearing. The transformative power of music is inspirational in this splendid show.
Review by Chris Omaweng