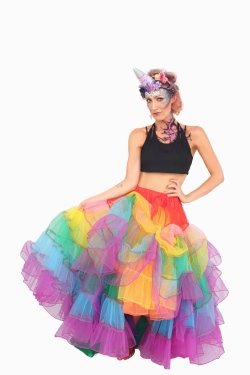 Daniel Sloss encouraged his Edinburgh Fringe audiences to “go and see weird sh*t”, a call to step out of one’s comfort zone and see something one wouldn’t ordinarily book for. Broken Romantics: A Unicorn’s Quest for Love fits the ‘weird sh*t’ bill for me, and as Emma Dean kept singing, “I am a f**king unicorn” repeatedly, I wondered a) what on earth I was sitting through and b) who or what is the unicorn having relations with?

I never did find out the answer to the second question. As to the first, it turned out to be an equally joyous and poignant production. In the end, the inner child suddenly deciding to ‘be’ a unicorn is no different from a schoolgirl having different passions and desires from one day to the next.

Supporting Emma Dean on stage are band members Tony Dean and Richard Grantham, Katie Swan on backing vocals, and Jamie Kendall, dubbed ‘The Heartbreaker’, who delighted the ladies in the audience in my row, partly by not wearing very much during most of the performance, and partly by some very good physical movement.

Like many people, Dean has endured the pain of relationships ending, and has, by her own admission, been collecting songs regarding heartbreak since 1997. And while some of the numbers in this song cycle are predictably melancholic, there are other songs that were lively enough to have some in the audience at the performance I attended nodding to the driving beat as though at a rock gig.

The songs are given context by Dean’s anecdotes, and while she is now able to look back on what occurred with a smile on her face, the songs become interesting snapshots of her thoughts at the time. Dean’s vocal range is quite impressive – more than once, I was reminded of Kate Bush when Dan hits the highest of the high notes – and if just being on stage without having to do anything counts as audience participation, maybe we should all have been up there with Kendall doing his thing around us.

Some of the stories and songs are memorable for sheer bizarreness. One split up took place because Dean refused to carry out her then partner’s wish to defecate on him. One musical number is called ‘I Want to Lick Your Eyeballs’, in which Dean, singing to what is now an ex-lover, gets “hornier for your cornea”, the sort of rhyme that elicited about as many laughs as groans. But Dean saves the best for last, and her concluding remarks send the audience out happy and hopeful. Quite an achievement for a show about loss. I’ve never seen anything like this. An intriguing production, as deep as it is wide.

Edinburgh audiences are about to meet acclaimed Australian songstress, writer and director, Emma Dean in a thrilling cabaret about heartbreak, healing, and unleashing your inner unicorn.

Emma Dean stars in a contemporary cabaret supported by The Broken Romantics Band featuring multi-instrumentalist Tony Dean, viola looping extraordinaire Richard Grantham, and sublime backing vocalist Katie Swan. Physical theatre performer Jamie Kendall weaves in and out of the show playing ‘the heartbreaker’, a homage to ghosts of ‘boyfriends past’.

After sell-out runs at Hope Mill Theatre, Manchester, and The Park Theatre, London, in 2022, Maureen Lipman returns to the West End with a performance … END_OF_DOCUMENT_TOKEN_TO_BE_REPLACED

THE PHANTOM OF THE OPERA at Her Majesty’s Theatre today announces Jon Robyns as ‘The Phantom’ from Monday 3 April 2023, Holly-Anne Hull as ‘Christine … END_OF_DOCUMENT_TOKEN_TO_BE_REPLACED

2023 marks the 50th Anniversary of the legendary smash hit musical The Rocky Horror Show, as it continues to play a newly extended tour through 2023 … END_OF_DOCUMENT_TOKEN_TO_BE_REPLACED