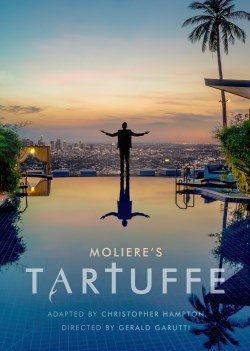 Acclaimed film and television actor Paul Anderson will play the title role in Tartuffe at the Theatre Royal Haymarket, alongside celebrated French stage and screen star Audrey Fleurot as Elmire. In the West End’s first ever dual-language production, Molière’s classic comedy re-imagines Tartuffe as a radical American evangelist who uproots the life of a French film tycoon in Hollywood.

Tartuffe will premiere for a limited ten-week West End run at the Theatre Royal Haymarket from Friday 25th May 2018 (Press Night on Tuesday 29th May).

Paul Anderson will make his West End debut as Tartuffe, a duplicitous evangelist who holds Orgon’s family under his seductive spell. As well as starring in the hit drama Peaky Blinders (BBC & Netflix) as Arthur Shelby, Paul Anderson has held leading roles in The Revenant (20th Century Fox), Legend (Working Title), In the Heart of the Sea (Warner Bros. Pictures) and Sherlock Holmes: A Game of Shadows (Warner Bros. Pictures). Paul Anderson will also appear as Guy of Gisborne in Leonardo DiCaprio’s upcoming Robin Hood film (Summit Entertainment) later in 2018.

Additional casting is yet to be announced.

L.A. Present day. French media tycoon Orgon has re-located to Tinsel town with his family, his heart set on becoming Hollywood royalty. With a new studio to his name, and a palatial Beverly Hills mansion, his empire seems infallible. But all is not as it seems, as Orgon falls under the seductive spell of Tartuffe, a radical evangelist. So comprehensively has Tartuffe hoodwinked Orgon that he looks set to steal his fortune, drive away his son, seduce his wife and marry his daughter.

As befitting the Theatre Royal Haymarket, which was known to the play-going world as ‘The New French Theatre’ following it’s opening in 1720, this adaptation of Tartuffe will alternate between English with French surtitles and French with English surtitles to reflect the unfolding plot.

Written in 1664, Tartuffe, or The Impostor became regarded as one of Molière’s most celebrated comedies, complete with some of the greatest classical theatre roles. Set present day in Donald Trump’s America, the play’s trenchant mockery of human frailties remains as relevant as ever in this darkly comic adaptation of the classic satire.

Adaptor Christopher Hampton is an Academy, BAFTA and Olivier award winning writer and director. His screenplay credits include the Oscar-winning Dangerous Liaisons, Atonement, Ali and Nino and A Dangerous Method. His stage credits include his Olivier Award-winning adaptation of Les Liaisons Dangereuses, Sunset Boulevard, Stephen Ward, and his original plays Appomatox, The Talking Cure, White Chameleon, Treats, Savages and The Philanthropist.

Director Gerald Garutti is the former dramaturg of the French National Theatre (Théâtre National Populaire, 2006-11). In English, he has directed a script-in-hand performance of Dangerous Liaisons for the Royal Shakespeare Company, Notes from the Underground starring Harry Lloyd (The Print Room) and The Fall Of The House Of Usher (Vingtième Théâtre). His latest production in France was the sell out Brief Praise of Night starring Pierre Richard (Théâtre du Rond-Point & touring). He has written, adapted and directed texts including Badly But Quickly (National Theatre, Odéon), Correspondence For Three (Le Printemps des Poètes), The Hunters of the Absolute (France Culture), A Century of Fury (Brangues), The Sense of Desire (Odéon), Haim – In The Light Of A Violin (Salle Gaveau, national tour for four seasons) and Lorenzaccio (Théâtre National La Criée).
www.TartuffePlay.com

After sell-out runs at Hope Mill Theatre, Manchester, and The Park Theatre, London, in 2022, Maureen Lipman returns to the West End with a performance … END_OF_DOCUMENT_TOKEN_TO_BE_REPLACED

THE PHANTOM OF THE OPERA at Her Majesty’s Theatre today announces Jon Robyns as ‘The Phantom’ from Monday 3 April 2023, Holly-Anne Hull as ‘Christine … END_OF_DOCUMENT_TOKEN_TO_BE_REPLACED

2023 marks the 50th Anniversary of the legendary smash hit musical The Rocky Horror Show, as it continues to play a newly extended tour through 2023 … END_OF_DOCUMENT_TOKEN_TO_BE_REPLACED