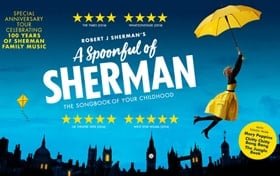 The double Oscar-winning Sherman Brothers – Richard M Sherman & Robert B Sherman – wrote more motion picture musical songs and scores than any other songwriting team in film history and became one of the most formidable songwriting teams in family entertainment. From 1964 onwards their unparalleled partnership produced unforgettable music for dozens of films, particularly many of Disney’s best loved titles including Mary Poppins, Chitty Chitty Bang Bang, The Jungle Book, Bedknobs & Broomsticks, Charlotte’s Web, and The Aristocats. The highly prolific brothers were the sons of the great Al Sherman (1897-1973) whose own musical talents produced songs for the likes of Frank Sinatra, Ella Fitzgerald and many singers of the golden American Songbook period of the 1930s-1950s.

Robert J Sherman, son of Robert B. Sherman and a successful composer in his own right brings the utterly compelling story of one family’s century-long, award-winning musical journey to UK audiences in 2018. Three generations of Sherman songwriters are brought to life in this delightful show which includes songs from Robert J. Sherman’s own charming musical, Love Birds, which premiered at the Edinburgh Fringe in 2015.

The National Theatre’s new musical Hex returns to the Olivier theatre for Christmas, after its original 2021 opening was delayed due to covid. The … END_OF_DOCUMENT_TOKEN_TO_BE_REPLACED

As it celebrates its 8th anniversary in the West End, The Play That Goes Wrong, the Olivier Award-winning smash hit announces an extension to the … END_OF_DOCUMENT_TOKEN_TO_BE_REPLACED

Producer Josh Andrews has today announced the lead cast for the UK tour of Peter James’ Wish You Were Dead: George Rainsford, will star as James’ … END_OF_DOCUMENT_TOKEN_TO_BE_REPLACED

MAMMA MIA! THE PARTY, London’s premier dining experience, is delighted to announce the new cast arriving at Nikos Taverna on the Greek island of … END_OF_DOCUMENT_TOKEN_TO_BE_REPLACED

Perform Productions is delighted to announce the cast and creative team for the West End premiere of Magical Merlin this October half-term. The … END_OF_DOCUMENT_TOKEN_TO_BE_REPLACED