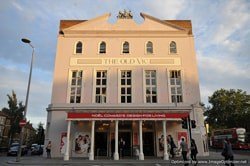 50 days before The Old Vic turns 200, the theatre announces a host of celebratory activities, from free performances and a family-focused open house with comedy, stage make up demonstrations, puppetry workshops and a marching band; to a cabaret Birthday Variety Night. Birthday celebrations will run from Friday 11 May (the actual birthday) until Sunday 13 May, during which time The Old Vic’s doors will be open to as many people as possible.

The Old Vic is London’s independent theatre, a charity in receipt of no regular public subsidy. For almost two centuries this iconic theatre has been vital to its local community, whilst also playing a significant role in developing the cultural landscape of the UK. Throughout its history, ground-breaking productions, social mobility and inclusion have remained central to its work both on and off stage.

The theatre will be embracing an inclusive and open-armed spirit throughout the weekend with a programme of events designed to present something for everyone.

Of the anniversary Artistic Director Matthew Warchus said: ‘The beloved Old Vic Theatre, named after a princess but sounding like a pub, is 200 years old. Situated like a beacon, right at the geographical centre of our capital, it occupies a unique place in the hearts of innumerable theatregoers and theatre-makers as London’s local theatre. Its special identity was established by the inimitable Lilian Baylis who ran the company from 1912 to 1937. Her tenacious, assertive, daring and celebratory vision pervades the bones of the building to this day. At this anniversary, we celebrate The Old Vic’s iconic and iconoclastic history and look forward to a long and vibrant future as an exciting, welcoming and uplifting hub of creativity. This is your theatre, so come along and celebrate with us.’

FRIDAY 11 MAY
The theatre will be celebrating the special day with an entirely free performance of Mood Music. Since the launch of the 200-day countdown last October, members of the public have had the chance to enter into a ballot to win a pair of tickets for the show and be a part of this once-in-a-lifetime audience experience. On the evening the audience will receive a special memento, have their picture taken for the history books, be treated to some very special birthday cake courtesy of My Fair Cakery and join Artistic Director Matthew Warchus, along with familiar faces, in wishing the theatre a special 200th birthday.

SATURDAY 12 MAY
Daytime celebrations will be full of opportunities for the community to get involved with a free Street Party and family-focused Open House. At 12noon the festivities will begin on the South Bank outside the National Theatre with a 10-piece marching band from Kansas Smitty’s who will lead a procession of revellers to The Old Vic. We are delighted that joining the procession will be representatives from organisations that either began life at The Old Vic or are connected to the theatre through the work of Lilian Baylis including the National Theatre, English National Opera, Morley College and Sadler’s Wells. There will be performances along the way and we are looking for as many people to join us in opening the festivities as possible.

Once at the theatre, the fun will really begin with street performers, activities, food stalls and an interactive pedal-powered sound system bringing the pedestrianised Webber Street to life. Inside The Old Vic will be a full programme of completely free activities for ages 3+ including:
• Mrs H and the Sing-along Band
• Puppetry workshops with Maia Kirkman-Richards
• The Children’s Bookshow presents Alexis Deacon, Rachel Rooney, Benji Davies and Jan Blake
• Stage Make Up Presentation with Dan Frye, whose credits include Harry Potter and The Deathly Hallows
• Comedy Club 4 Kids presents Howard Read and Inel Tomlinson
• The Penny Lectures – a series of talks inspired by the original 19th Century lecture series

All events are free with limited capacity. We encourage booking in advance via our website. A small allocation of tickets will also be available on the day. For full programme details visit oldvictheatre.com/openhouse Saturday evening will see the auditorium transformed into a never-before-seen cabaret space for a one-night-only Bicentenary Variety Night fundraiser. Harking back to The Old Vic’s days as a Music Hall in the 1880s, the evening will see the return of unadulterated entertainment as we present a mix of new and established talent including Comedy from BBC Radio 4 sketch comedy duo The Pin; musical performances from the company of upcoming hip-hop musical Sylvia; dance from The McOnie Company; an exclusive performance written by Dennis Kelly; a brand new musical venture from the Critics’ Circle Most Promising Newcomer and 2018 Olivier Award nominee Sheila Atim (Girl from the North Country) and much more still to be announced.

Tickets starting from £15 are available for Dress and Baylis Circle seating. Cabaret tickets are available from
£70 and include wines provided by Indigo Wine, beer by Greene King and pies generously provided by Pieminister. For full programme details and to book tickets visit oldvictheatre.com/varietynight.

SUNDAY 13th MAY
The weekend will culminate with the sold-out Bicentenary Fundraising Ball on Sunday 13 May. Sponsored by Bank of America Merrill Lynch, with Associate Sponsor Buccellati, a sumptuous three course dinner generously provided by Fortnum & Mason and support from Champagne Taittinger, Greene King and Pernod Ricard, the event will raise vital charitable funds towards securing the future of The Old Vic for the next generation.

Following its multiple West End runs, and continuing success at its home – The Other Palace, Heathers the Musical will embark on its highly … END_OF_DOCUMENT_TOKEN_TO_BE_REPLACED