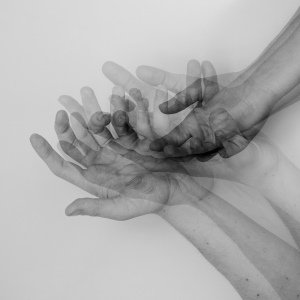 There are multiple issues facing Trev (Scott Howland), and there’s some commonality with Louise (Emily Brown), the latter having ‘lost’ her mother because her parents are divorcing, and the former actually losing his mother – that is, she has passed away. There are a number of narrative points that are left unresolved by the end of the show, but unusually this doesn’t detract from the main issues and themes that the play brings to light.

When it comes to loss and bereavement there are various coping strategies that different people adopt – some, for instance, throw themselves into whatever it is they do for a living, working extra shifts in a bid to take their minds off what has happened, or otherwise do what Trev does, and frequently go out for most or all of the night. Trev’s Dad (Drew Paterson), naturally has concerns about his son’s wellbeing, but striking up a deep and meaningful conversation only results in an antagonistic response from Trev. The production tries to put Trev across as working class, though for me he is still in a position of relative privilege, thinking nothing of spending “a couple of grand” to go overseas for a while in order to take time out. By contrast, I know people who have turned down invitations to weddings because they couldn’t afford to go. And all that paper that gets used up on stage as the show progresses seems incredibly wasteful at a time when environmental issues are an increasing concern.

Just as well, though, that making ends meet isn’t an issue for Trev, because his problems in other areas continue to mount up. The play doesn’t place any blame on Trev for not opening up more (even if it’s good to talk, and so on) but rather examines the ludicrous manner in which both victims and alleged perpetrators of rape are treated by the criminal justice system. It all brings to mind the musical number ‘Gee, Officer Krupke’ from West Side Story, in which a young man is taken to various government agencies, each of which conclude that the solutions to the problems the chap faces lie outside their remit.

It’s not quite like that in Grip, in which police investigators, named only as Woman 1 (Kristin Winters) and Woman 2 (Jessica Temple), put Trev and Louise through hours and hours of interrogation, even asking in what ‘position’ sexual relations had taken place. That isn’t the most grotesque part by a long shot: that comes in the form of a highly descriptive scene, during which there is a total blackout for good reason. All I will say is that it is no wonder that there is a reluctance among some people, whatever their sexual orientation, to get tested down below.

Some curiosity is raised as it isn’t always immediately clear why the events being depicted are taking place – the police questioning (by non-uniformed personnel), for instance, begins before who has allegedly done what to whom is clarified. It’s a fairly complex storyline overall, but a gripping one, even if the occasional moment of comic relief wouldn’t have gone amiss. Although it’s really Trev’s story, this is very much an ensemble piece of theatre, emphasised by non-speaking characters in any given scene stood on the stage perimeter looking in at the action. Scene changes are slick and speedy in this intriguing and informative production, tackling some immensely relevant contemporary issues.

From N2P – the creative team who brought you the sell-out; ‘Play 2’ – comes; GRIP. a revamped piece of writing about trauma, accusations, psychosis and suspicion. GRIP. is based on one version of a true and previously untold story, and bravely takes on one of the most divisive oversights in today’s legal system.

Nothing To Perform presents
GRIP.
by Scott Howland
30th April – 4th May 2019
https://www.tristanbatestheatre.co.uk/