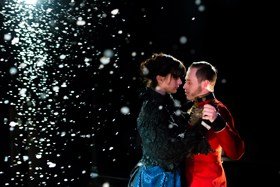 How on earth could this Russian literary classic that is as complex as it is deep, that spans a huge physical distance and transverses centuries old classes, customs and culture; be translated onto a tiny stage in Crofton Park? The answer is, cleverly and originally with a hugely talented and versatile cast and a director (Ross McGregor) with vision. He has a fearless ability to take his cast across boundaries and he encourages them to take risks and to embrace the risqué. The Arrow and Traps Theatre Company have made Anna Karenina for 2016. Prepare to be delighted, entertained, transported to another time and place and dare I say, even slightly aroused!

This adaptation by Helen Edmundson takes the form of a conversation between the characters Anna and Levin, although miles apart they manage to communicate. Their narration shows their friendship and admiration for each other and also their very different views on life and love.

Ellie Jacob is captivating in the titular role. She demonstrates that a woman’s needs in the 1800s are no different to a woman of today by portraying the vulnerability and uncertainty of a woman wanting to be recognised for her independence and desires as well as being recognised as a wife and mother; and she does it with the air of sophistication that only nobility can bring. Anna is both class and wantonness combined.

The love triangle is perfect. Adam Elliott is wonderful as the stiff and very proper husband Karenin. He handles the cold detachment of the character and combines it with a slight bewilderment at his wife’s shocking behaviour thus creating sympathy for a character who is not necessarily likeable. His complete opposite comes in the form of the dashing Vronsky.(Will Mytum) There is no doubt that this is a very sexy story and the physical love between Anna and her dashing Captain is an essential part of seeing how and why she is capable and willing to risk everything. This lust is on full display leaving the audience in no doubt that this has gone way past a flirtation.

The contrast in this story is the love of Levin and his Kitty. David Paisley is outstanding as the pure and honest Levin. His good and caring ways show a strength way more attractive than the so called hero of Vronsky; an ability to express himself eloquently and more lovingingly than Karenin and a loyalty that Anna’s wayward brother Steeva could only dream of. Pippa Caddick’s Kitty shows a sweet coquettishness as the realisation finally settles in her heart.

A beautiful story, beautifully played out with a supporting cast that dip in and out of characters like changing clothes, bringing each one it’s own personality and sparkle.

If you like your Russian literature strong, sexy and very relevant to today, this is the show for you. It will leave you exhausted through the emotional journey but thoroughly worth it!

“Vengeance is mine, I will repay.” ROMANS 12:19
Anna Karenina, the wife of a provincial governor, revolts against a superficial existence of compromise and embarks on a scandalous affair with a charming officer Count Vronsky. As Anna is brought to the brink of destruction, she must finally decide whom she is living for.

Arrows & Traps Theatre Company bring Tolstoy’s epic novel to life, translating a thousand pages, and a cast of nearly that many, into a visceral, intimate chamber drama, filled with blossoming romance and bloodied revolution. This is a timeless tale that speaks to our human right to live, and love, and be free.

This play was first put on at The Mill at Sonning in early 2010 - the world has, of course, changed significantly since then, and the script has been … END_OF_DOCUMENT_TOKEN_TO_BE_REPLACED

It’s easy to see why the Orange Tree has brought this one back for another run, less than a year after its first outing here. This is a bold, … END_OF_DOCUMENT_TOKEN_TO_BE_REPLACED

I always loved Choose Your Own Adventure books. Definitely not the Steve Jackson ones where you had to roll dice (who did that?) to find out whether … END_OF_DOCUMENT_TOKEN_TO_BE_REPLACED

Well, there’s a bit about Pablo Picasso’s (1881-1973) paintings in this show that bears his name. But it’s mostly about his approach towards women. … END_OF_DOCUMENT_TOKEN_TO_BE_REPLACED