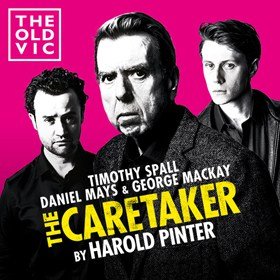 It’s not often that you spend a full three hours in a theatre amongst a packed audience that’s hanging on every word, every gesture and, yes, every pause throughout a drama so gripping, so engulfing, so evocative of a pre-internet time long passed.

It’s 56 years since The Caretaker first discombobulated audiences with its seedy slice of junk-attic life: it was immediately installed (with the help of Kenneth Tynan) as one of the great plays of the twentieth century written by Harold Pinter who was to become the fully Nobel-lauded greatest playwright of that same century. This revival does the play complete justice right down to every last 1960’s feature as reflected in Rob Howell’s magnificent set, created in Clutter Central and sponsored by Scavenger Heaven: it’s actually deserving of its very own reality TV show.

There’s dirt and there’s grime and there’s peeling wallpaper and water staining and leaks and disintegrating stud walls. I half expected the odd rat to jump out of some grubby crevice and start gnawing at the impossibly high pile of yellowing newspapers in the corner. Hugh Vanstone’s effective lighting creates the quintessential ambience and the set is accurate down to the last detail. Almost. I think you’ll find that electric plug wiring colours changed in the late ’sixties and thus Aston should be stripping red/black/green rather than the modern blue/brown/yellow on his 15amp round-pin plug.

Pedantic? Maybe, but it’s the kind of thing that the obsessive, prevaricating, electrically-lobotomised, smile-shy Aston would be on top of. He spends half the play re-wiring an ancient flip-toaster – when he’s not sanding a plank of wood to shed-wall perfection that is. Today we’d classify him as autistic and encourage him to create an artwork out of his collection of rubbish but Daniel Mays brilliantly captures the mood of the time with his maltreated body and tortured soul. Aston is seeking something he is never going to find: solace. He brings back an old tramp, Davies, to his lonely garret in the hope that some companionship, however little, however forced, might help. It doesn’t. The stink and the noise drives him to distraction and he reverts to stripping his wires and sanding his plank whilst continuing to deny his sorrow. It’s a kind of unfathomable desperation for which there is no cure and Mays, frankly, plays the character to perfection. This guy can act. His haunted shallow stares will live with me for a long time.

George Mackay as Aston’s younger brother Mick is menace on legs. He has the silent snarl of a rottweiler and the deathly venom of a rattlesnake, a baby-faced thug who takes pleasure in discomfiting others and twisting the knife repeatedly in the scars of their weaknesses. Moments of extreme intimidation are punctuated with seemingly mundane catalogues of aspects of everyday life – buses, blokes he’s met and state-of-the-art interior decoration. Mackay handles this superbly, his leather-clad stillness intricately permeating the cut-with-a-knife atmosphere so that every one of Davies’s buttons are pushed, every fragility is exploited. Mick sits like a slimline Buddha amongst the seedy squalor and he controls everything. Mackay fits naturally into the long line of sinister villains that Pinter has created and great actors have portrayed down the years.

And then there’s Davies. A seedy, irascible old codger with extraordinary pretensions of grandeur and very picky with his attire. He’s a tramp. He’s dressed like a tramp, he eats like a tramp and he smells like a tramp and we keep thinking we might get a whiff of that ourselves. He whines, he snivels, he ingratiates, he inveigles, his hackles rise with ease and ultimately he’s the architect of his own downfall though he’s kicked on his way down the stairs by Mick’s unforgiving winklepickers. Donald Pleasance created the role in the original production and here, in Timothy Spall, we have a more than worthy successor. It starts with the eyes: alert, missing nothing, rolling, taking in every nuance of the other characters’ behaviour, the head then responding with almost imperceptible nods and tilts and knowing twists and turns. The body is like a contortionist’s, reacting to violent, invisible thrusts, to taunts that cut to the bone. And then the arms, the hands, the fingers: every gesture is seemingly unstaged, and unstagey; every movement is natural and every reaction is fresh and new and, apparently, unrehearsed – though of course we know that not to be the case. There’s an extraordinary sequence when, offered fresh clothes by Aston, Spall pulls out a couple of shirts from a bag as if he’s removing dead fish from a stagnant pool, holds them at arms length and utters the immortal word “Check…?” with all the disdainful abhorrence of a well-heeled socialite commenting on some hundred guinea worsted. He’s down-and-out and threadbare but he can still quibble about the pattern.

This is a consummate performance by an actor at the very peak of his skills and I image that Spall kneels by his bed every night and gives thanks to Harold Pinter for creating such a fabulous role – as so many have done before him.

Director Matthew Warchus wrings every last dreg of pathos out of this script creating in the process a seminal production which is a valuable social document, never straying from Pinter’s original script and concept. This is how (some) people lived their lives back then – the ingrained everyday racism, the Victorian attitude to mental illness, the casual teddy boy violence that passed for boredom-alleviation in the late ’fifties. Warchus and his cast understand this and leave no stone unturned in their quest for historical accuracy and artistic perfection. How well they succeed.

Pinter is a great playwright but it takes a great creative team to make a play like The Caretaker work as well as this.

Harold Pinter’s menacing and darkly comic play The Caretaker arrives in a brand new production at the Old Vic Theatre as part of incoming Artistic Director Matthew Warchus’ inaugural season. Directed by Warchus himself, the production will star the much loved British actor Timothy Spall in the role of Davies, alongside George MacKay and Daniel Mays.

First seen in the West End in 1960, the play quickly became one of Pinter’s most popular works and was the first to be a commercial success. The original production transferred to Broadway, and was adapted into a film adaptation in 1964.

Often described as a ‘tragi-comedy’, Pinter blends realism with the Theatre of the Absurd, creating a highly unique and stylised new type of theatre. Deeply unsettling, this psychological study of two brothers and a tramp deals with themes of allegiance, innocence, and corruption. Don’t miss one of the 20th Century’s most remarkable dramas in a brand new production at one of London’s most exciting and innovative venues.

If the audience were to be exposed to full versions of the seventy-four songs listed in the programme, it would be a very long show indeed. I suppose … END_OF_DOCUMENT_TOKEN_TO_BE_REPLACED

How can a play be both charming and devastating? Through its tight script, abundant humour and pitch-perfect performances, 4th Country manages to … END_OF_DOCUMENT_TOKEN_TO_BE_REPLACED

Britain, so a London cab driver once told me, is obsessed with the Second World War, as though it happened just recently. Power Luncheon would seem, … END_OF_DOCUMENT_TOKEN_TO_BE_REPLACED