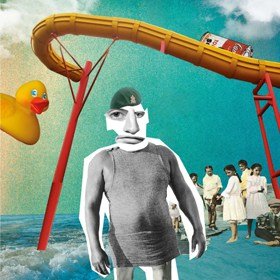 One of the most bizarre pieces of theatre I’ve come across, it is also one of the most lovable. Thlides – pronounced as though saying the word ‘slides’ with a lisp – has a distinct sense of humour that is never in bad taste, something sorely lacking in contemporary comedy, whatever form it takes – observational stand-up, television sitcom, or in this case, a play with dark comedy. What an absolute pleasure it is to enjoy something that is neither uncouth nor unsettling.

Achieving a high level of intrigue amongst all the peculiarities, Spawny John (Lydia Lakemore) remains where he believes he’ll be happy, though stubbornly doesn’t move throughout the day, one of those very British characters unhappy at being interrupted by noise and conversation but stoically putting up with it all. There is a difference between loneliness and simply being alone, a point missed by a few minor characters, but this is not a flaw in the script. Quite the opposite: boisterous schoolchildren on holiday are hardly likely to have much empathy with someone who is just relaxing and taking time out for themselves.

At surface level, there may not appear to be much to this play than a slightly eccentric but otherwise harmless man and his friend Duck (Rosie Grundy-Orchison) in conversation, and a laissez-faire one at that – they are not exactly putting the world to rights. But in hindsight, it’s multi-layered without labouring its deeper points. The beauty of it is that members of the audience can take the more intense aspects of the play, or leave them; it’s like watching an episode of the animated comedy ‘The Simpsons’, where there’s all sorts of spirited shenanigans going on, with hilarity and poignancy in equal measure, but different people and different generations will take away different things from it.

I found myself enjoying proceedings so much that I gave up trying to make sense of it all. This is one of those productions that is best enjoyed by going with the flow. Suspending disbelief is par for the course, I suppose, for a reviewer, and here, acceptance of the more outlandish aspects of the show is made much easier by references to real-world objects and places. But the world of Thlides is so absorbing that it is just as well, for example, that characters kept saying ‘Wakefield’ over and over again at one point, as it took a few seconds for me to appreciate they really were referring to the actual Yorkshire cathedral city.

The wider applications in John’s unwillingness to move are immense, from a general empathy towards anyone who doesn’t like change (such as theatregoers who return to the same long-running production repeatedly to be assured of a good time, every time), to specific situations such as elderly people who find themselves moving out of their own property and into a care home facility. None of those scenarios are in any way referenced or alluded to in the play itself, but it’s an example of how such ingenious writing can make me think of those scenarios, even while all I can see at face value is guests at a Butlins resort doing their thing.

What an enthralling and engaging piece of theatre this is. It doesn’t take itself too seriously either – “None of this is real!” barks a character at the audience, one of many moments of raucous laughter. The cast unmistakably have fun bringing this play to life, and largely remain in character even after the curtain call. I can only apologise for sounding like a stuck record in pointing out that it was so zany I would have struggled, had I chosen to do so, to follow the plot completely. Yes, it’s weird and wacky, but it’s simultaneously thoughtful and intelligent. And seeing as I am unable to fault it, I have no hesitation in giving it top marks. I do hope this isn’t the last we see of Thlides – it deserves a few more than just two performances.

‘Too many greeblies in the pool today. I just wanted some quiet y’know, and peace, some good old quiet and peace. Not my lucky day though is it? Greeblies everywhere.’

Spawny John, an army veteran, and Duck, an inflatable duck, sit halfway down a Butlins water slide. But they’re not the only ones looking to do a spot of sliding today. A surreal dark comedy addressing the finer points of death, loneliness, and soup.

Written by Danny Cooke and Daniel Spicer
Produced by Dirty Rascals in association with Fragility Takeover The Cat’s Back
The Cat’s Back, 86-88 Point Pleasant, London SW18 1NN
18th and 19th May 2016

I have seen some outstanding acting recently at the intimate Finborough Theatre, and this new play is no exception. The highly talented cast quickly … END_OF_DOCUMENT_TOKEN_TO_BE_REPLACED

In the pandemic (remember that?) I worked in adult social care. My role was to help older people in their own homes with daily tasks - I’d cook meals, … END_OF_DOCUMENT_TOKEN_TO_BE_REPLACED

The world-famous Wilton’s Music Hall and the children’s classic The Wind in the Willows make perfect bedfellows. Piers Torday has written a version … END_OF_DOCUMENT_TOKEN_TO_BE_REPLACED

Some journalists get, as it were, a bad press, though some of them don’t help themselves with some of the things they write and do. This play doesn’t, … END_OF_DOCUMENT_TOKEN_TO_BE_REPLACED

Paul (Lewis Bruniges) and Freddie Metz (Oliver Yellop), who identify as cousins, are so desperate to get out of the German Democratic Republic, … END_OF_DOCUMENT_TOKEN_TO_BE_REPLACED