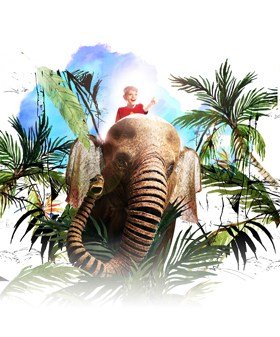 Whatever the production at Regent’s Park, there’s always a subplot. This is not so much waiting in the wings as hanging over the auditorium. It’s called the weather or, to give it its proper title, the English Weather. On balmy summer nights, it’s a welcome, walk­-on sort of character; at other times it upstages the rehearsed drama, even causes a cancellation, thereby literally stealing the show.

The night I saw Running Wild, the new Michael Morpurgo adaptation just blown in from Chichester’s Festival Theatre, the rain clouds lowered like a ceiling, got ready to tip everything they’d got but then thought better of it and left. A sound move as they would have been contending with the unparalleled floods of the catastrophic 2004 earthquake and tsunami in the Indian Ocean, which brought a human death toll approaching a quarter of a million.

Morpurgo’s story tells of Young Will and his recently widowed mother, who are holidaying in Indonesia when the ocean bed erupts and the waters break their bounds, landing, as it happens, all over the audience. If I had not been on the high ground of Row O, I would have gone under for sure. Now, Will (movingly portrayed by Joshua Fernandes) has been saved by Oona, who felt premonitions of the disaster when they were on the beach. When I first set eyes on her, I had a second’s panic. It was not the weather invading, but the even closer presence of Regents Park Zoo. For Oona is an elephant and, from a distance, an even more plausible artefact than the warhorses which made a star of Handspring Puppets in the author’s best-known work.

We are now squarely in Morpurgonia, a land in which sentient creatures are ranged against insuperable odds and act heroically for the benefit of their human compadres. If natural disaster from the earth’s bowels is not enough of an enemy, be patient; once we are in the relative safety of the Indonesian jungle, up pop some very nasty human pieces of work in the form of the hunters and their venal overlord. If geological wilfulness can’t knock the earth off balance, someone somewhere will be giving it their best shot. Or shots, whole fusillades of them, battering some of the most exquisite stage puppets you’ve ever seen into (temporary) oblivion.

This is, of course, a post­-Warhorse show; how could it be otherwise? Hence it runs the risk of piggy-­backing, or rather elephant ­riding on the unique selling point of the earlier hit. Yet this hand­worked bestiary is not simply Son of Handspring, even though its members bear the influence; unsurprising, given that Finn Caldwell, a co­ director, with Toby Olie, of the puppetry company Gyre and Gimble, was part of that show’s team at the National Theatre. What the directors (Timothy Sheader and Dale Rooks) and designer (Paul Wills) have evolved here is a system of movement which is as much human as animal. That is, the actors are not just operatives for their orang­utans, crocodile and tiger but visible, complicit partners in the dangerous dancing of their lives.

This co-­operation is echoed, visually and sonically, in the use of the thirty­-strong troupe of teens, and younger, to become the elements through which the story moves; now the bearers of silken tsunami waves over the audience’s heads, now the river engulfing the elephant, now the jungle itself, in all its plenty, danger and vulnerability. In the context of a story with an angry polemic at its heart about the ruin of Indonesia’s habitats through the international palm oil industry, this approach can be seen as a will towards some decency, complicity, call it what you will, between the human animal and the allegedly wild sort.

Perhaps it’s also striking a blow, knowingly or otherwise, for a technology that doesn’t work so much through virtuality and image-­generation as through ingenuity, choreography and co-­ordination. Ambitious but unshowy stuff from a company that does exteriors as few others can. Respect to the adult players who’ve taken on animals as well as small children. Talking of whom, look out particularly for Regents Park veteran (To Kill A Mockingbird) Ava Potter as Lilly.

For Will, going to Indonesia isn’t just another holiday with mum. It’s a new start, and the chance to ride an elephant called Oona. But then the tsunami hit.

Charging deep into the jungle, Oona escapes the beach with her young rider desperately clinging on. Miles from civilisation, at first there’s wonder, discovery and tree-top adventures amongst the orang-utans. But, as thoughts turn to mum left behind on the beach, tigers prowl, hunger hits, and Will must now learn to survive the rainforest. Then come the hunters…

It is 2002 – another Royal Jubilee year, and HRH (Mary Roscoe) is due to open a new Science wing in a 'sink' comprehensive where Dr Derek Jones … END_OF_DOCUMENT_TOKEN_TO_BE_REPLACED

Dr Anna LaRosa (Dr Stefania Licari) has a lot to say. Just as well, as she’s the only one on stage in this medical comedy, which largely draws its … END_OF_DOCUMENT_TOKEN_TO_BE_REPLACED

Nikhil Parmar’s one-man show, originally written as a TV pilot, manages to touch on a wide range of themes from Islamophobia to modern fatherhood with … END_OF_DOCUMENT_TOKEN_TO_BE_REPLACED

Handel’s 1738 opera Serse (or Xerxes) is an exploration of power, love and human frailty. King Serse falls in love with the voice of his brother … END_OF_DOCUMENT_TOKEN_TO_BE_REPLACED

Lea Salonga has her fans. She also has some superfans, the ones who yell, “I love you Lea!” at almost every opportunity. If that wasn’t enough, there … END_OF_DOCUMENT_TOKEN_TO_BE_REPLACED